Okay, so, I tried to do another TGIF vlog for you guys last week, but the video camera on my main computer wasn't working (why it suddenly disappeared when it was there two weeks ago, I'll probably never know!), so I did the video on my laptop which seemed to work perfect. However, while the camera worked on that one, the audio didn't, so I did a whole almost-ten-minute-long video about a miserable week I'd recently suffered through (and the retail therapy that got me to the end with my sanity intact) with no sound!!

Anyway, the highlight of my video was a pair of cool new purses I picked up at Hepkat's in downtown SLO (after enjoying a pomegranate martini, some stuffed mushrooms, and a Caesar salad at Palazzo Giuseppe's.  Delicious!!). I've always loved browsing at Hepkat's - it's a super fun, cool, retro, rockabilly clothing and accessory shop, and I usually want to buy at least 1 of everything. And, this time I did buy two items: two cool purses!

The first one looks orange in the photo, but it's actually a bright, sparkly red. It's a retro style kiss-lock purse by Lux De Ville that reminded me so much of a purse my grandmother used to have in the '70s, I couldn't resist it! 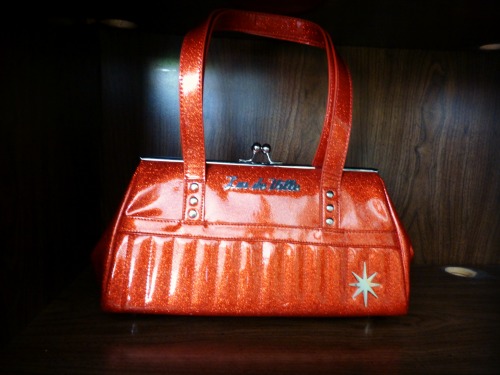 I doubt I'd use this as an everyday bag, though there is plenty of space inside for a my wallet, phone, and even a small paperback as well as my "readers". But, I kind of see this as my super fun Friday (TGIF!!), or special occasion purse.

My everyday purse is a cross-body messenger bag by Trophy Queen. I picked the multi-coloured Mexican blanket style that I think will go with a lot of my outfits, and is bright and summery. There's tons of room inside for lots of stuff, and I particularly love the faux leopard fur! 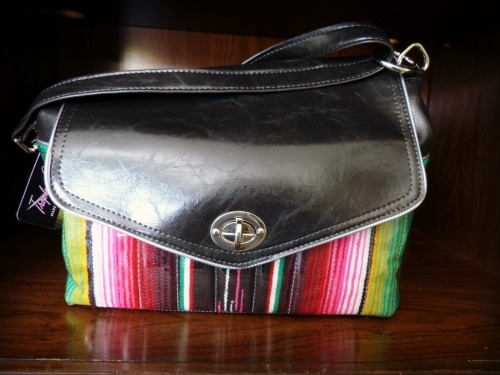 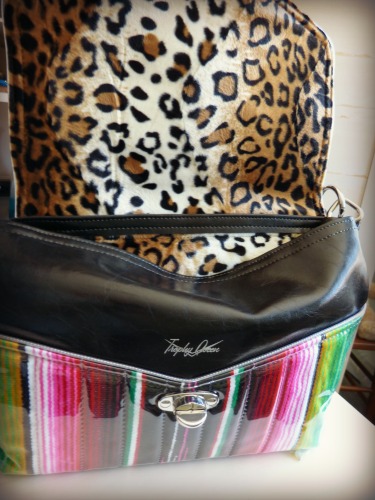 I very nearly purchased a third bag, as they had several very cool totes with skulls, three of which I was seriously debating buying, but I actually restrained myself and kept it to just these two, because I'm mentally strong that way.

Okay, the truth is I was just really overwhelmed by the choices, and couldn't decide which skull tote to buy, so I just paid for the two purses I had chosen (and those choices were hard enough, because they kept pulling more awesome stuff out of the back!), and left. With that awesome "shoppers' high" you just don't get with online shopping! I will probably go back and get a skull tote eventually, but I think I'll hold off until September or October when I will probably be ready to put the summery messenger bag  in storage for the season.

Oh, I also did some fragrance shopping at Sephora, but I'll save that for another post. For now, have a great week, I'll try to get my vlogging issues straightened out, and I'll see you all later! Cheers!