We had our Toys for Tots/office Christmas party last Friday, and it was quite successful! We received around 40 wonderful toys including dolls, board games, craft kits, and stuffed animals. 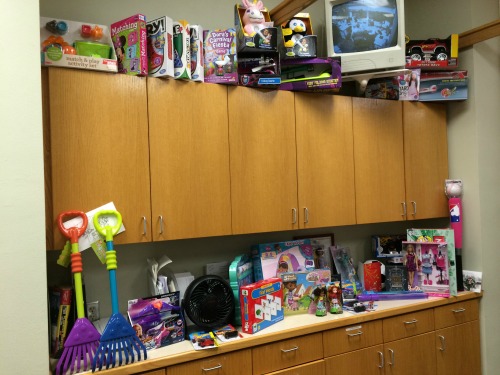 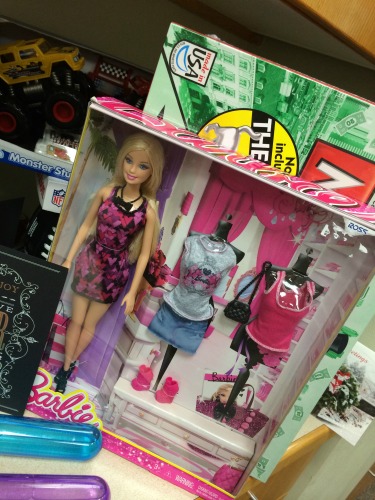 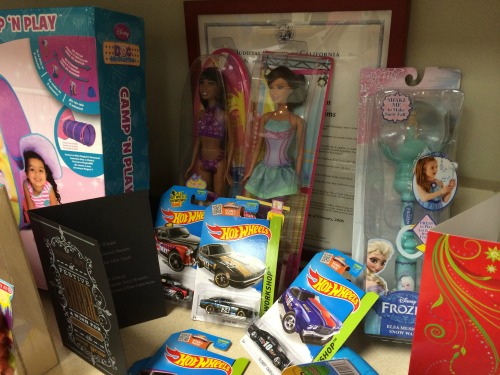 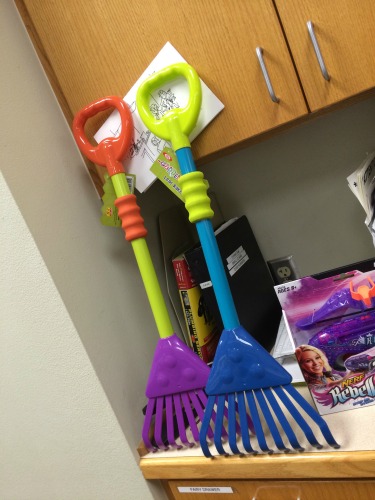 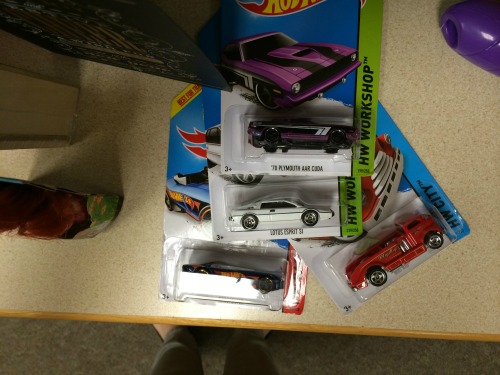 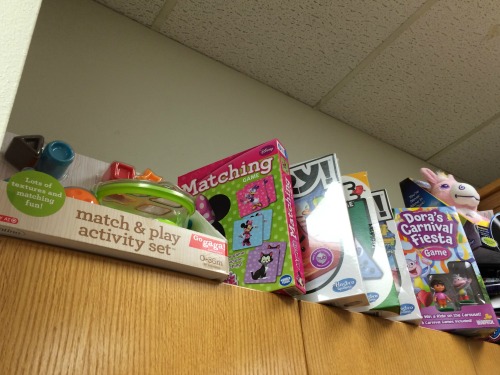 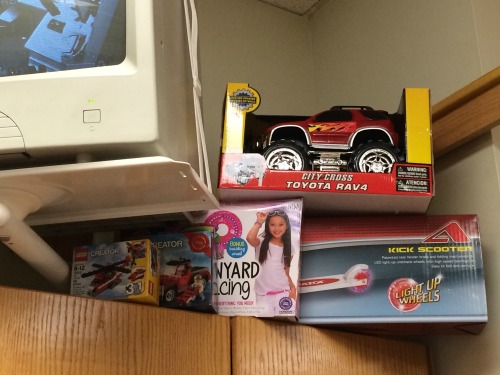 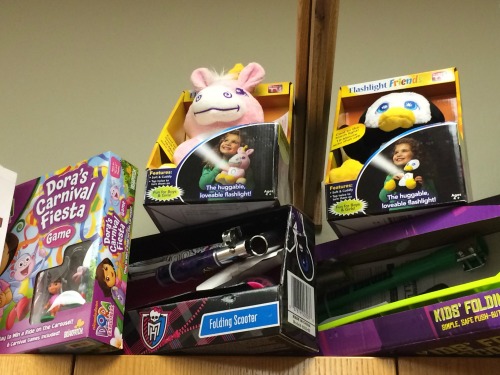 We put up a few festive Christmas decorations as well. That second little pair of snowmen apparently sing a song and "dance" a bit. They're super cute! 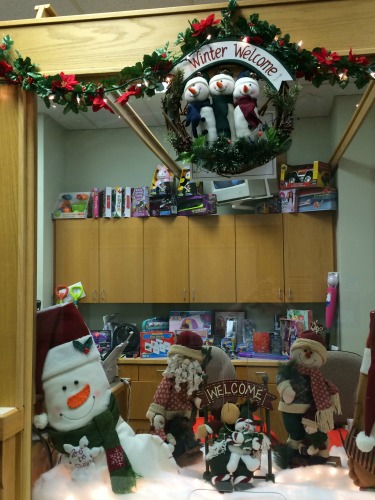 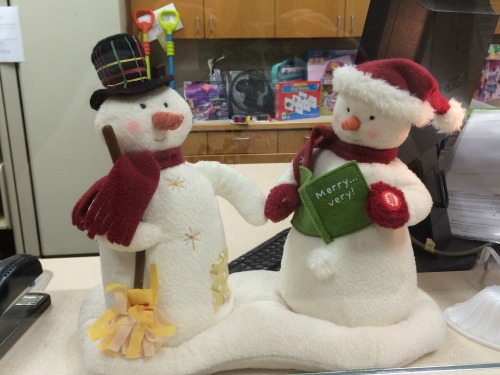 We had some wonderful food and beverages as well including breakfast burritos, fruit and veggie trays, cookies, candies, deviled eggs, and salsa and hummus. Not pictured: the crock pot full of amazing vegetable soup! 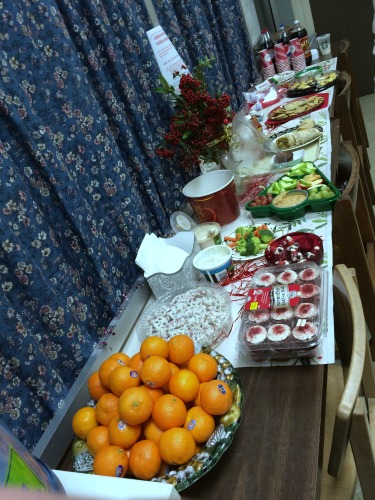 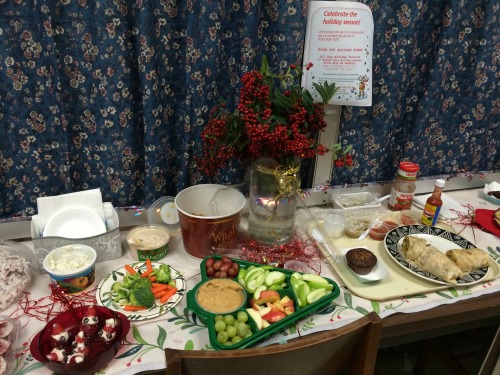 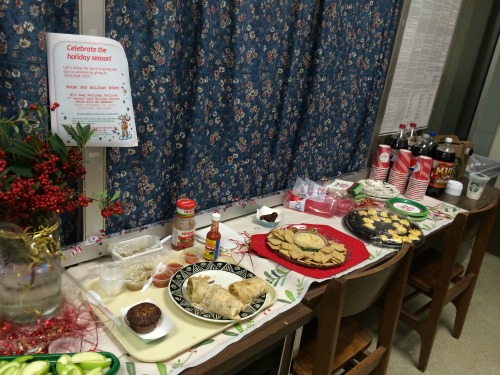 Did your office have a Christmas/Holiday party? Was it awesome? Let me know in the comments! Cheers!

Earlier this week I meant to write up a comprehensive recap of last weekend's adventure in Morro Bay, but this week has been crazy busy for me, and I just didn't get it done. Therefore I'll be recapping briefly in five bullet points:

D is for Delicious 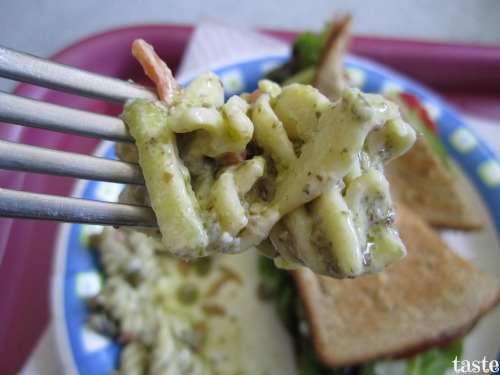 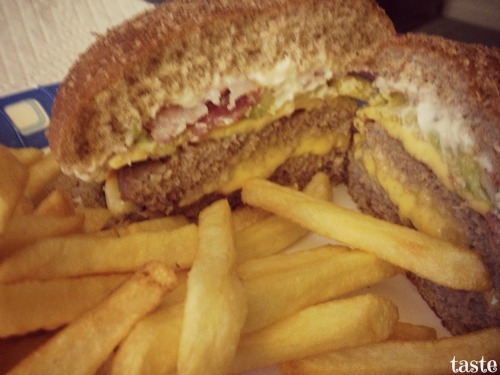 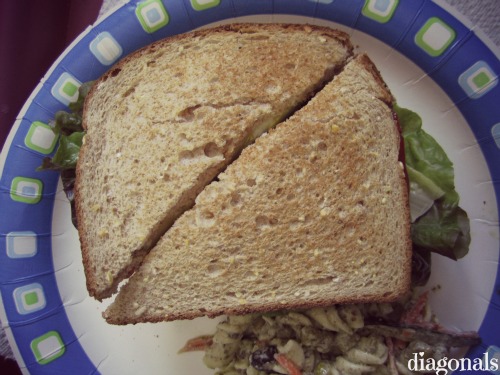 Rainy Sunday in the Kitchen

It has been raining steadily since about 8:00 a.m. today - a perfect day to do some cooking! I made a delicious turkey meatloaf with mashed red potatoes and steamed green beans (from a recipe out of my all-time favourite cookbook,  Eating for Life by Bill Phillips) for our Monday and Tuesday night dinners, and used the leftover ground turkey with a Hamburger Helper to have with a couple salads on Wednesday and Thursday nights, and finally I hard-cooked some eggs for my breakfasts this week.  It was exhausting work and I usually dread spending nearly a whole day in the kitchen, but it's so worth it when I come home in the evening after a long day of working at my job and working out at The Club, and have a delicious and healthy meal waiting for me! And the extra protein first thing in the morning keeps me from feeling hungry until nearly lunchtime. It's a win-win!

OMG, I cannot wait to dig into this meatloaf! 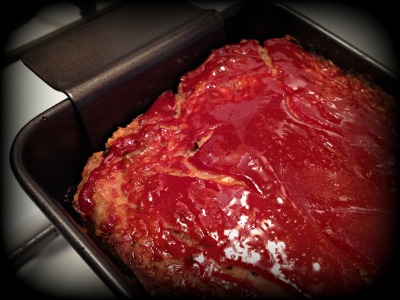 And, yes that is The Perfect Meatloaf Pan as seen on TV, and yes it's fabulous!

I do still have tonight's dinner to cook, but that won't be too bad - baked salmon with roasted cauliflower and leftover rice from last night. Super fast and easy. So, now, it's time for a nap! Cheers!

Thursday evening before doing our grocery shopping, mom and I stopped by Crazy Sushi Fever, a new sushi place in Atascadero.

It's right by the Albertson's (where we rarely grocery shop becasue they're the most expensive store in town, but that's a rant for another time) where the Big Bubba's Bar-B-Que used to be. We never made it to BB'sBBQ which I regret, as I LOVE a good BBQ.

So, yeah, sushi. Now I love sushi, but my mom has been hesitant to try it despite enjoying seafood in general. The idea of eating raw fish squicks her out. However, I assured her Crazy Sushi Fusion served cooked food and she wouldn't have to eat raw fish, and she finally agreed to try it.

We started with something safe: grilled asparagus. It was delicious!

I also ordered oysters on the half shell because I've been craving them hard since having some delcious oysters (as well as baked mussels) at Hog Island Oyster Co. in SF during Rehab last year. Most half-shell appetizers have 6 or 8 oysters minimum which is just way too much raw shellfish for me to consume by myself, but Crazy Sushi Fever serves just three. That I can handle!

Or so I thought before I saw the damn things:

I really wish I'd had a ruler to show just how ginormous these things were. Maybe you can tell by the standard-sized slices of lemon at the top and bottom of the plate. In swear that one in the middle was at least 4 or 5 inches long! (insert dirty joke sniggering here. i am a ten-year-old boy sometimes) The top one I was able to down no problem. The bottom one I had to cut in half. The middle on I tried to cut in thirds to make it managable, but was only able to choke down one part of it before giving up. (shudders) I think my craving for raw oyters has been satisfied and perhaps damaged for quite some time.

Not that they were bad or anything, but they didn't taste as good as Hog Island's and when they're so big hyou have to chew them a LOT ... well, that's a bit more than I really expected.

Anyway, we both chose better for our entrees with my mom having the teriyaki salmon and I had the Mustang (cooked) roll which had soft-shell crab, avocado and eel.

Mom said her salmon was very good and my roll was good, too, but it was not as good as the rolls I've had at Shin's Sushi, plus it was huge! We were both stuffed when we walked out of there.

In general, the food is good, the atmosphere is nice, and the people are really nice and attentive, but with two other sushi places in town (neither of which I've tried yet), I'm not sure I'd make another trip to Crazy Sushi Fever any time soon. Three-and-a-half stars out of five, I think.

This week, F is for food. I love food - not just cooking it and eating it, but photographing it, too, as many of you have noticed over the years! My food pix are not fancy - although the food itself sometimes is! - they won't be appearing in Food and Wine or Sunset or even Eating Light or Clean Eating magazines. That's not the point. The point is that I enjoy sharing some of the delicious -and yes, beautiful - meals I've had.

I can't remember exactly when it started, but I do know one of my earliest food photos was at the 2002 San Francisco JournalCon. We were at a lovely Chinatown restaurant (the name of which I've forgotten) and were told regarding the following "eat it like a taco": 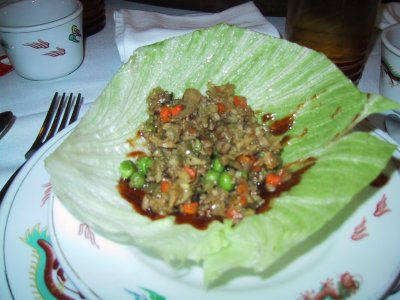 In 2005 I took a trip with my BFF Jewel to San Juan Capistrano where we had an amazingly delicious (and beautiful!) meal at The Tea House: 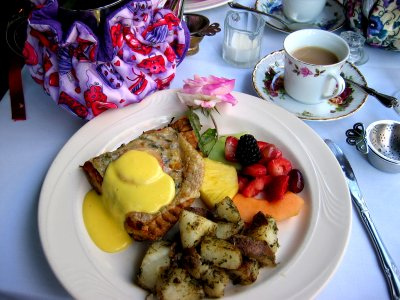 Then in 2007 we went to Niagara Falls and had this gorgeous lunch at The Table Rock Restaurant: 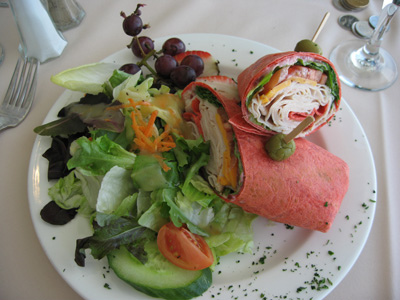 I've visited Green Bay, Wisconsin several times over the past few years, and the most fabulous meal has got to be the homemade chicken booyah and brats and candied pretzels with pineapple fluff made by the beautiful and fantastic June! 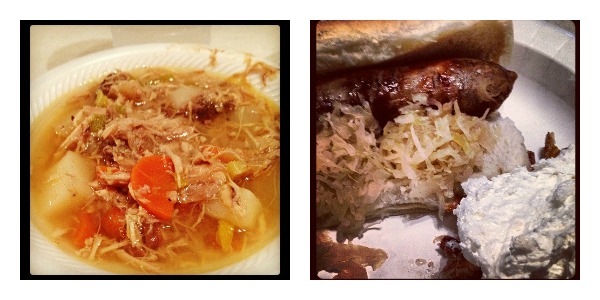 But it's not all just brats and beer in Green Bay. There are also some fabulous restaurants that serve vegetarian and vegan dishes as well. One of my favourite restaurants is The RAWstraunt, which specilizes in "raw" food (which means nothing is cooked over 104°). This raw cake was not only delicious, but beautiful as well: 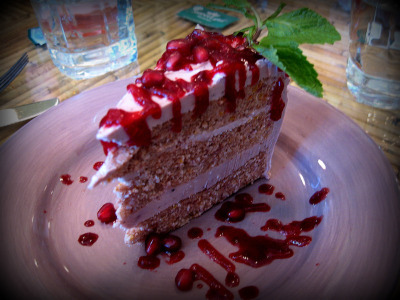 I don't just photograph restaurant food, though. I also like to take snapshots of meals I've cooked. Lately I've been cooking several recipes from the Clean Eating magazine, such as this Smokey Pork Chop: 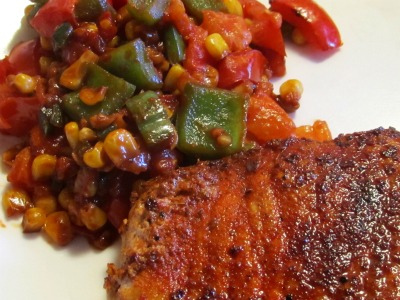 A delicious raspberry lemon drop martini at The Custom House in Avila Beach.