God, but this has been a crappy week! Tears for days! We lost David Bowie AND Alan Rickman! WTF? We also lost a local judicial officer, Commissioner Sefton. (I never had the opportunity to work with him, but I understand from people who did that he was a pretty nice guy.) We've also had a lot of chaotic changes at work, and just when we thought it was settling down into a nice little routine,  the chaos starts again.

So, anyway, I've been trying to think of something positive and upbeat to give you (and me!) on this semi-rainy, end-of-a-rotten week TGIF, and have decided to share five photos I took of pretty, serene garden statutes, which I included in my new calendar from Shutterfly (titled "Garden Zen"), and hope to receive soon. Please enjoy! Have a peaceful, lovely, joyous weekend. Cheers! 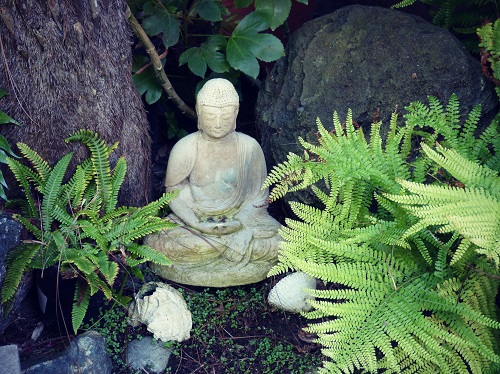 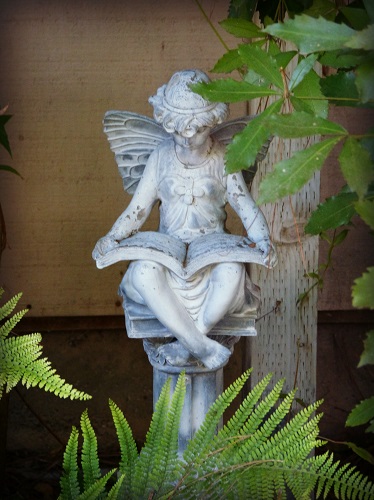 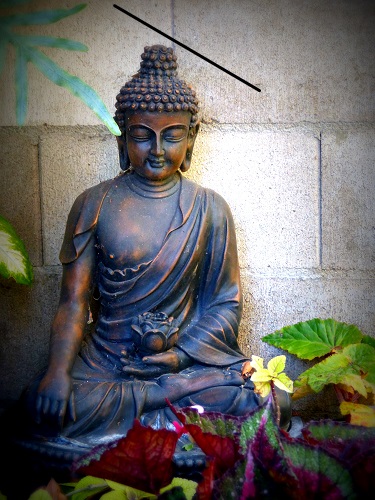 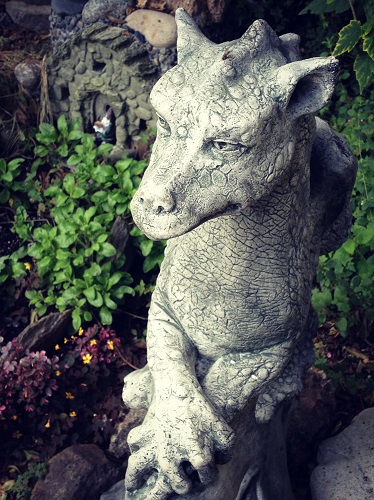 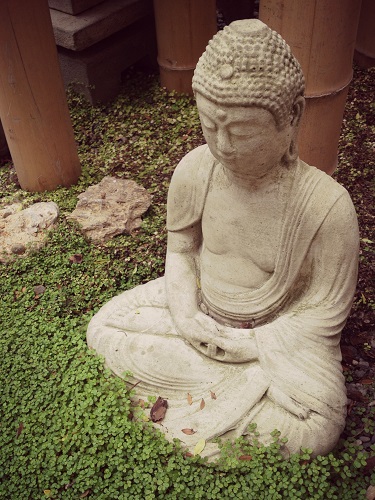 P.S. Are you going to Weetacon? I'm considering a couple of these pictures for the charity raffle. Would you put a ticket in a bag for an 8X10 of one of these pictures? (Or even a 5X7?) If so, which one? Let me know in the comments! It's about time to get going on my charity donation items!!!

Well, this first week of August has been incredibly dull. However, here are a few of the highlights:

1. Things have been cray cray at work this week; lots of nutty, crazy people, and weird stuff keeps coming up. I think we're still feeling the effects of the Blue Moon we had at the end of last month. Hopefully we're done with it and next week can be calmer.

2. I know I said I wasn't going to go to the Central Coast Writer's Conference (it was just last week, wasn't it?) this year, but I ended up talking myself into it yesterday. There are really only two sessions I'm interested in, but I wound up curious enough about them to sign up. There really wasn't much else except a couple of the other sessions on topics I've had before (YA, and World Building), but with different people this time, so maybe the information will be different as well. Who knows? Still, I'm hoping it'll be fun, and I won't end up regretting it!

3.  I went through a few more dresser drawers as well as my closet again this past weekend, and ended up with a full garbage bag of Goodwill stuff as well as a couple smaller bags of actual garbage. There was a lot more stuff I probably could've (SHOULD'VE) gotten rid of, but I was just not able to. At least not yet. I'm currently listening to the audio version of The Life-Changing Magic of Tidying Up by Marie Kondo, and getting a lot of inspiration from it. I really DO want to get rid of most of my stuff! I really DO want to have very few things to have to deal with and have ONLY things which "spark joy" and that I can and will use. I just need to stop forming emotional attachments to things, which, for me, is hard.

4. I finally got my toes done this week! This is Paz-itively Hot by OPI.

5. And, finally, surprise! my iris has suddenly bloomed! In August! All I can think is the rain we got a few weeks ago rejuvenated it! Typically, the irises bloom between February and April, sometimes May. This spring I don't think they came out at all, so this was a lovely and welcome sight!  I hope you all have a fantastic weekend! Cheers!

E is for Emerging 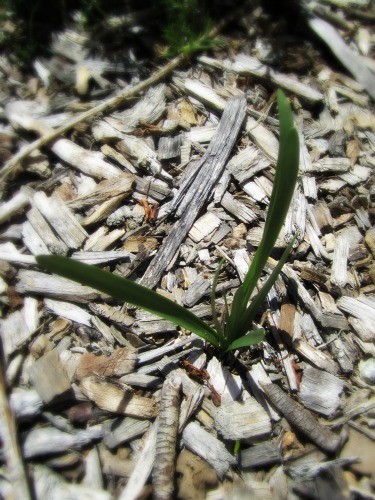 My little daffodils have finally come up! I don't know if they'll bloom or not, but I'm happy to see them all the same! 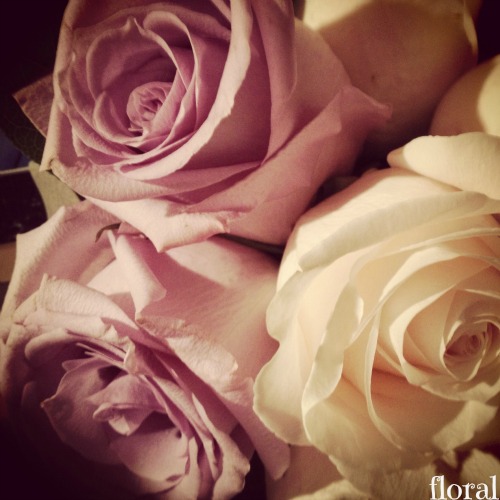 Greetings and welcome to this little life of mine! Generally people use the first day of Holidailies to introduce themselves to other Holidailies participants, but I really don't know what to say about myself that would be at all interesting, so instead I'll just blather on about my day.

Being Saturday, it was grocery shopping day. Typically my mom and I would get up and head off to Bru Coffeehouse for two of the best lattes in town and the best toasted bagel we've ever had, then go to Big Lots and the "Other Little Store" (actually called Grocery Outlet Bargain Market, which is a magically place that saves us TONS of money every trip). Also typically as the the first Saturday of the month, we would first have stopped by the Flea Market in the hopes of finding something fabulous, like paperbacks for .25, before going to Bru. The rain, however, drowned out the Flea Market today so, we decided to just have breakfast at Starbucks, then hit the "Little Store" (our name for the Atascadero Discount Grocery store, the original discount grocery store in town) for some great deals on slightly dented boxed foods like Hamburger Helpers and Rice-a-Ronis, and cheap cleaning products before heading to Vons.

After surviving Vons (and managing to get out under $100. due to meticulously sticking to our shopping list and using coupons), we headed home. I went out to the back yard to get some shots of wet rocks and leaves, but had to run inside because it started raining. Again. I ended up with some good shots, though, including this pretty shiny wet rock and some waterdrops on some white flowers that were supposed to be annuals, but have been coming back again and again for the past five or so years. Enjoy and Happy Holidailies! 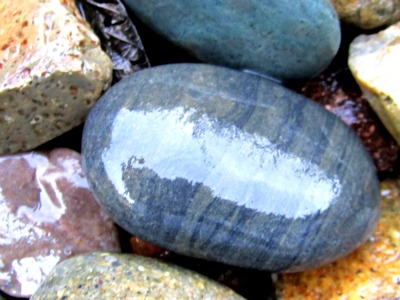 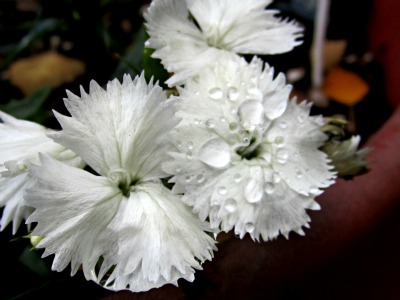 Well, our little Earthbox garden is done for the season. Yesterday I went out and harvested some peppers and tomatoes for dinner, and today mom and I decided it was time to take the plants out, so I brought in the rest of the peppers and one more little tomato that seemed to pop up over night. 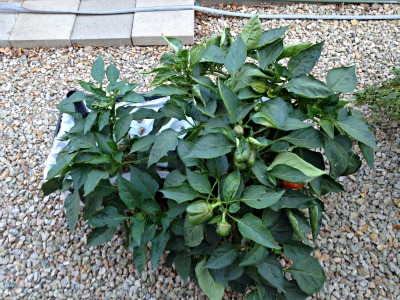 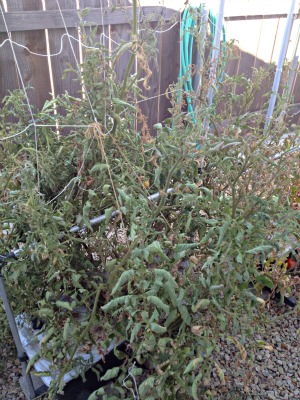 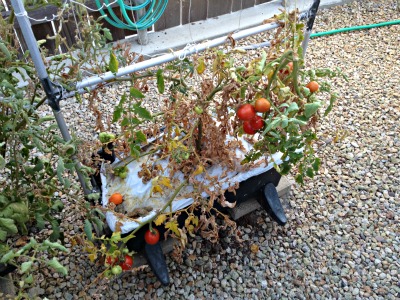 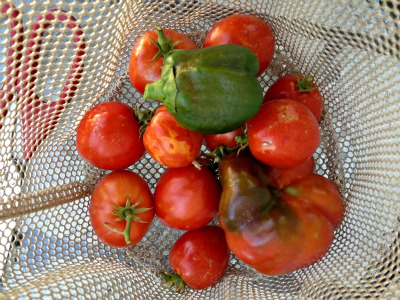 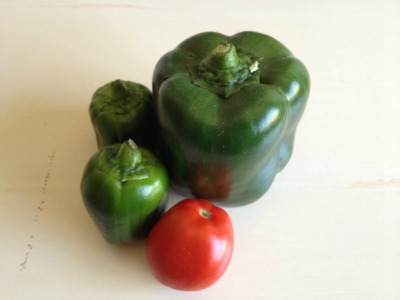 I'm kinda sad to see the end of the garden (mostly going to miss those sweet, delicious tomatoes!!), but I'm looking forward to next year. We're planning to just get 2 bush goliath tomatoes next year because the one we had this year was the best producer and we just weren't impressed by the big beef tomato, and a couple bell peppers, and I might even do zucchini again, or try something else.

Posted at 15:03 in Earthbox, Flowers & Gardens, In the Garden, The Earthbox Garden | Permalink | Comments (1)

Two Sundays ago I went out and took my weekly garden pics, but never got them resized or posted due to having put a bunch of my rubber stamps for sale on eBay, and subsequently selling them all within a couple hours. So then there was packing and printing and shipping, and gah! Why can't all my crap super good quality stuff sell this fast??

Then this past weekend I ended up with a cold that I'm despiratly trying to get over quickly since the Central Coast Writer's Conference is this coming up this weekend and my vacation with my mom to Cambria is next Monday thru Thursday. So I never even made it outside to harvest the few little tomatoes I can see from the kitchen window, let alone take a new set of pictures.

Anyway, the other night I was playing with one of my favourite photo sites, dumpr.net, and decided to do my garden pictures in lomo, just to be different. (BTW, dumpr looks.net has the best lomo filter for pictures,  IMHO.) So, here's what the garden looked like a couple weeks ago. It probably hasn't changed much.

Everything is crazy huge. My pepper plants are both pretty loaded down with peppers in various shapes, sizes and even colours. A lot of them have been turning red, and some have a little orange in them, too.  They have all been delicious sauteed in a little EVOO!

The Big Beefsteak tomato plant itself is ginormous, but the tomatoes never got too terribly big. They have been delicious, though, sweet and meaty, and hopefully we'll get some more over the next couple weeks.

We did get some pretty good-sized, uber juicy and delicious tomatoes off the Bush Goliath plant, but they're starting to fizzle out, too.  This plant was so successful we're planning to just get two fo them next year and skip the beefsteak.

I think the garden may be just about done for this year. The tomatoes are not getting as large, and there are fewer and fewer blossoms on the plants. The weather is finally (hopefully?!?) changeing from the hideously hot summer to a somewhat cooler fall, and I think in a few weeks we'll be saying farewell to the garden of 2012.

Posted at 15:49 in dumpr, Earthbox, Flowers & Gardens, In the Garden, Photography, The Earthbox Garden | Permalink | Comments (0) 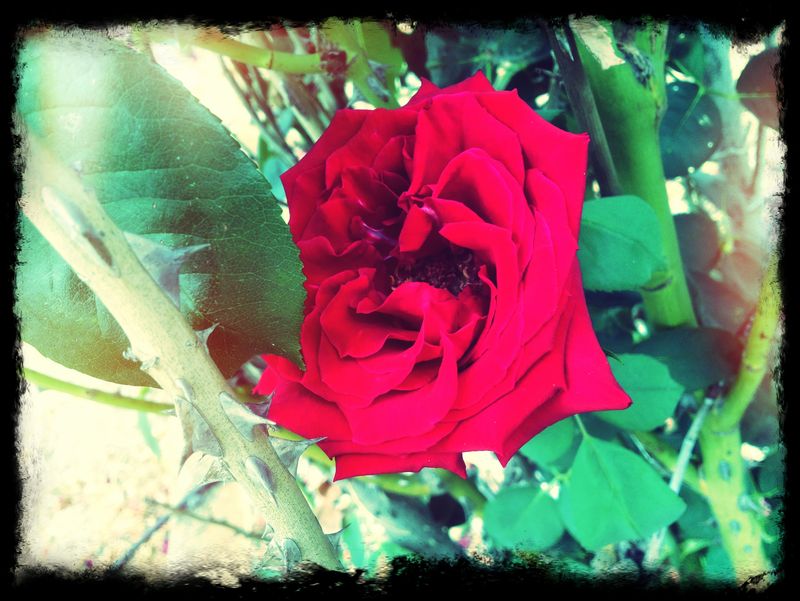 One of my grandpa's roses. Used the Diana effect on Camera+. Cheers!

Attack of the {Deliciously} Killer Tomatoes

OMG. Check out this garden: 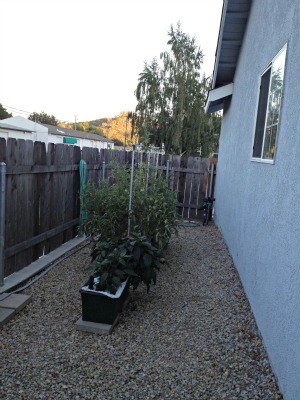 It's huge and we're suddenly getting tons of produce!

Both pepper plants are going strong. The little one has some baby peppers and blossoms, and the bigger one has several big peppers that are slowly going red. I left them and just took a nice big green bell and a couple little ones that were slightly burned. 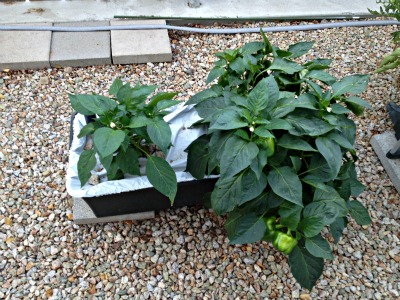 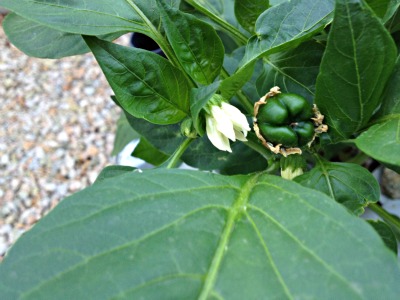 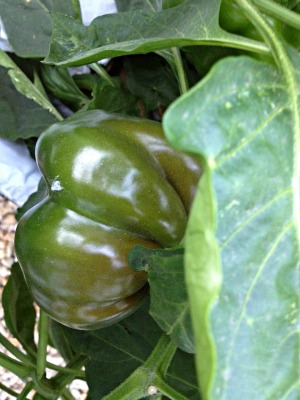 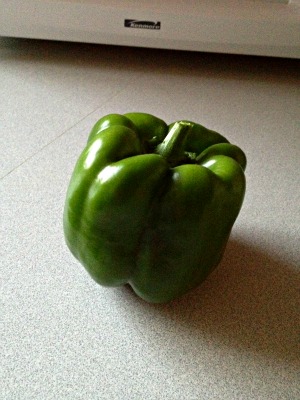 And, the tomatoes! Holy cow! The Big Beef tomato plant has exploded! Although none of the toms are very big, they're very red and juicy and delicious! 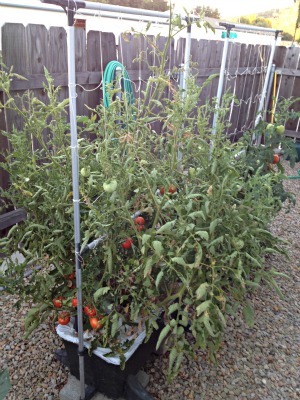 My Bush Goliath tomato plant, however, has several very good sized toms, most of which were ready to harvest today, too. Although they're not ginormous, either (I think it's been too hot and they're ripening faster than they're growing), they are the best tasting tomatoes I've ever had! 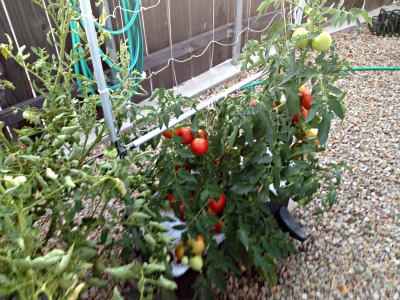 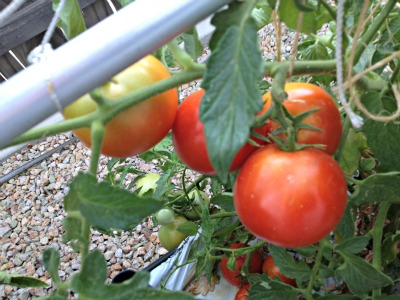 And, I love this awesome harvest bag from Fiskars! 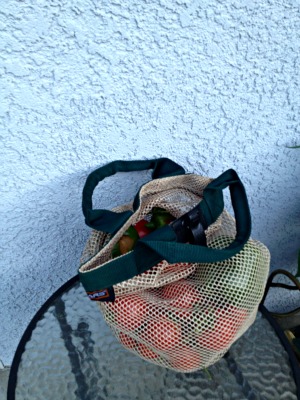 I was lucky to have it today as I ended up harvest a LOT of tomatoes and really needed something other than the bottom of my shirt to carry them in. 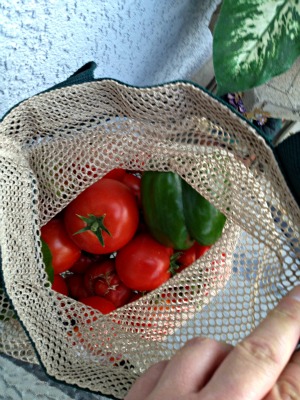 Here's my haul in all its bright red glory: 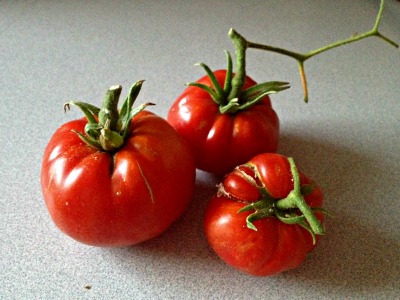 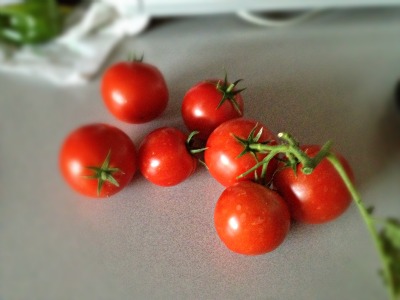 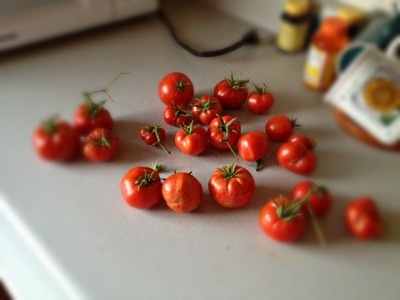 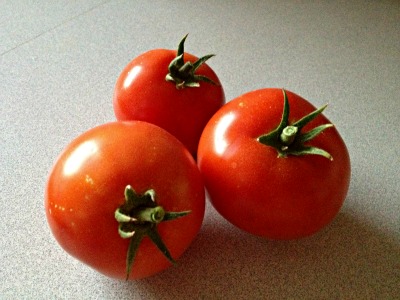 Posted at 18:05 in Earthbox, Flowers & Gardens, In the Garden, Photography, The August Break 2012, The Earthbox Garden | Permalink | Comments (0)