In preparation for the upcoming Holidailies, I have decided to practice updating my blog more than once or twice a week. I think this is my third update, and I already have tomorrow's Friday Five list started. Holidailies should be a cinch this year, right?!?

Anyway, I recently decided to get my lazy ass back in the kitchen and try cooking some vegetables other than steamed broccoli and zucchini. I have tons of recipie books/magazines and pins on Pinterest, but, veggies are hard to cook ... well, really they're harder to prepare than to cook, but still. It's hard. (See "lazy ass" in the first sentence of this paragraph.) However, I kept seeing recipes on Pinterest for clean eating roasted cauliflower, and the photos looked SO good, I decided to give it a shot. And, yes the prep work was horrific (Have you ever tried chopping up cauliflower? Pain. In. The. Butt!), but in the end, the cauliflower turned out delicious and well worth the effort.

It was quite simple (once the chopping was done!): I tossed the cauliflower in olive oil, salt and pepper, and roasted it at 400 for about 30 to 45 minutes. I didn't measure anything and didn't really time it; I just kept checking it as I was cooking other stuff, stirred it periodically, and pulled it out when I thought it looked perfect. I will definitely be making this again - despite the heinous prep work! - as well as trying other ways to use cauliflower and other veggies to add some variety to my dinners!

Posted at 22:13 in Clean Eating, In the Kitchen, Photography | Permalink | Comments (0)

I recently received the newest issue of Clean Eating magazine, and found it chock full of some amazingly delicious-looking recipes! I particularly like that there's a whole section of side dishes. I often struggle to come up with some different way to prepare veggies - the past couple of months have been full of a lot of steamed broccoli, asparagus and green beans. Not that there's anyting wrong with that, but it gets a little old after a while and I really want to try something new. 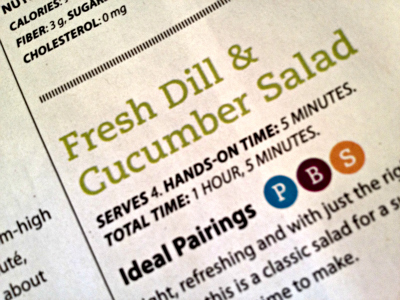 Well, here's something new: Fresh Dill and Cucumb er Salad! The magazine said it pairs well with beef, which is good becasue I cooked up a couple steaks for us tonight! 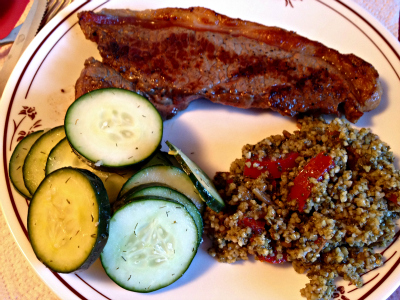 The cucumber salad was delicious and super quick and easy to make! I didn't have any fresh dill, so I substituted dry, but I don't think it made any difference. It was still yummy! 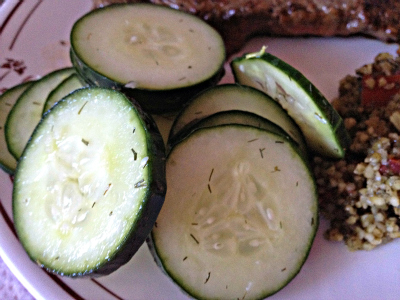 My February Photo a Day for today is a shot of last night's dinner: baked salmon with dill and fresh squeezed lemon  (brought in by a coworker who's lucky enough to have a lemon tree in their yard!) and lightly steamed asparagus. It's not a recipe from my favourite magazine or anything, but it's still clean and it was also delicious! 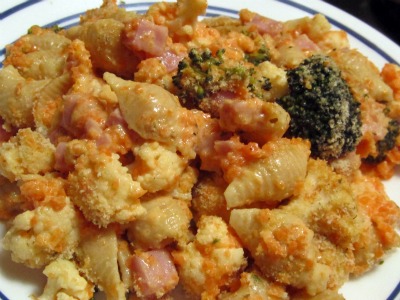 This evening I whipped up the Ham, Cheese and Broccoli Casserole from the new Clean Eating magazine special Classic Comfort Foods. I picked it because on the surface it looked easy, had just a few ingredients, and sounded delicious. However, when I got down to actually making the casserole, it was a LOT of work! I really should know better than to believe the "hands-on" and "total time" numbers they put on these recipes - it always takes me twice as long to make the stuff! 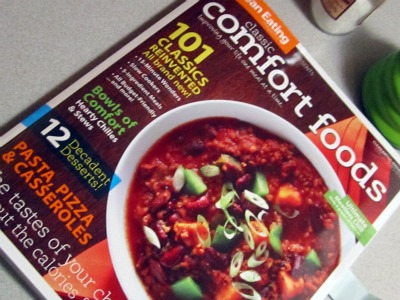 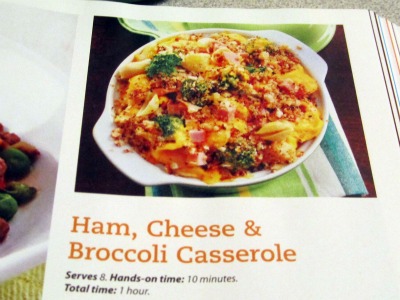 My hands-on time was at least 1 hour - I mean I had to wash and chop up a head of cauliflower, a couple heads of broccoli and four carrots which had to be finely diced. Then with the cooking, the broccoli and cauliflower is roasted, and the carrots are simmered with evaporated milk then blended with the cheese, then everything is mixed together and baked. Whew!

Still, in the end, even with the weird carrot/milk/cheese puree-thing, this casserole is delicious!! And, there's plenty of it leftover for Monday as well! I definitely recommend it. I think, however, if I ever make this dish again, I will buy frozen vegetables rather than deal with fresh, to save myself a LOT of time. 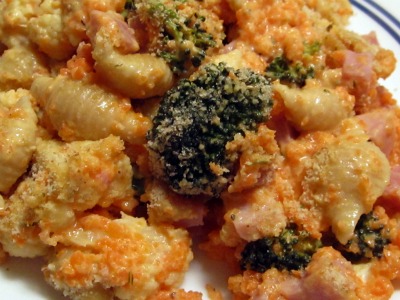 The salmon for this dish was suppoed to have corriander seed rubbed on it, but I don't have corriander seed and was unable to find any corriander seed, so I just did a quick herb, salt and pepper rub instead. The Swiss chard was prepared according to the recipe in the November/December issue of Clean Eating magazine, though. The meals was delicious and really easy to prepare!

It's no secret that my all-time favourite magazine out right now is Clean Eating. I love it more than Lucky, which is saying a LOT, believe me! I came across the premier issue back in the winter of 2008  when I was on one of my many diet and fitness kicks, and within a few days I mailed in the post card for a subscription. The recipes are yummy (with an exception or two, of course, but that might've been chef's error), and some of them are pretty easy, while others are difficult and most of them are time consuming. I mean, all that cleaning and chopping of fresh veggies takes forEVER! But, it's worth it in the end when you can serve a healthy, delicious meal!

Now normally I just make the main dishes (though I've done the occasinal side dish), and I usually just skim over the included bonus recipe cards, but for some reason the Snow Peas with Sweet and Sour Dressing caught my eye, and since I had everything in my cupboard except the snow peas, it was a quick and easy veggie side for my salmon dinner.

I made this recipe from Clean Eating magazine before, but at that time I didn't have the smoked paprika nor did I have a jalapeno pepper.  (Okay, honestly, I chose NOT to use a jalapeno pepper because I was afraid it would make the dish too hot, and I'm a wimp when it comes to hot and spicy foods) This time, however, I had both items and used them! 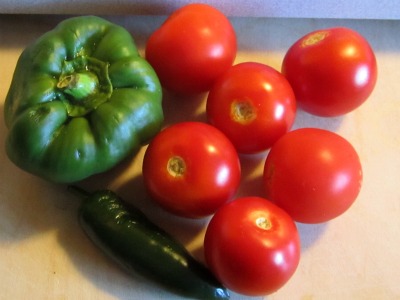 I used some tomatoes from our garden instead of buying the grape tomatoes from the store - I think that might've improved the taste considerably! - the green bell pepper is ours as well, and the little jalapeno pepper was from the garden of a co-worker of mine. 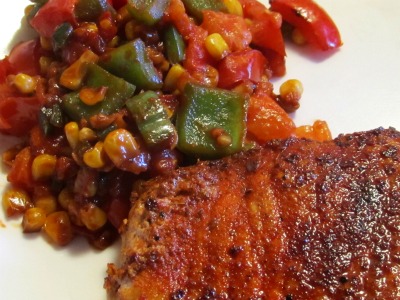 The dish turned out beautiful and delicious, and I will definitely be making it again. The jalapeno was not hot at all (another of my co-workers who is an amazing cook told me to remove the seeds and wash the pepper off really well to remove the oils that cause the heat; I did and it seemed to work!), and the smoked paprika has a lot more flavour than the plain paprika does. Next time, however I will be doubling the vegetables, because it's supposed to serve 4, but there's no way there's enough veggies for 4 people!

This evening I prepared Orange Salmon with Asparagus from the June 2011 Clean Eating magazine. 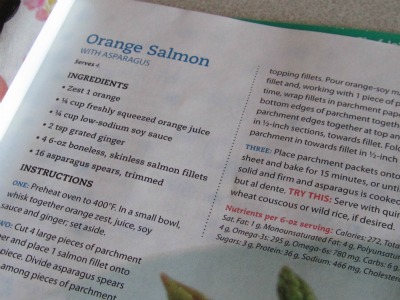 It was super easy to prepare and turned out perfectly! Mom and I were both pleased with the results and I look forward to making this again some time. 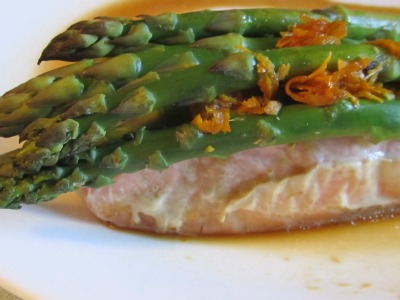 This evening I prepared the Smoky Pork Chops with Maque Choux-Style Vegetables  recipe from the April/May 2011 Clean Eating magazine. 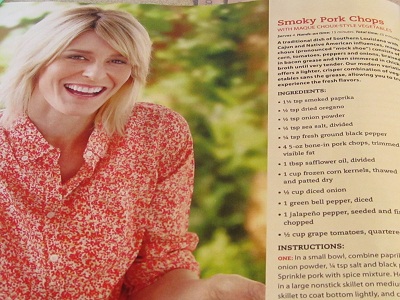 It turned out really good despite not having the smoked paprika listed in the ingredients; I used regular paprika instead and it worked just fine. Unfortunately, the paprika on the pork chops burned a little during cooking, but luckily, it didn't affect the flavour. Also, I skipped the onions and jalapeno pepper from the veggies, but they were still delicious without the heartburn-inducing ingredients! 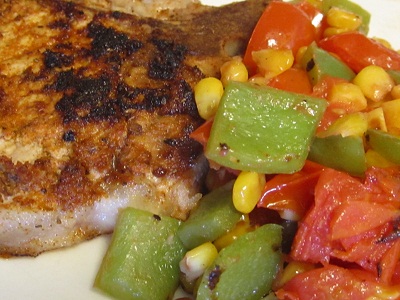 All-in-all, it was a very successful and delicious meal. I would like to pick up some smoked paprika and try it again just to see if it's any better.

Last night for dinner I cooked up a fairly easy and totally delicious meal: the Honey Mustard Chicken and Rice Pilaf from the March/April 2010 issue of Clean Eating magazine. 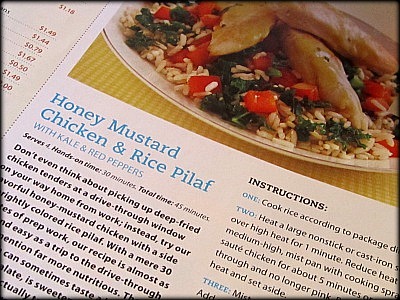 The most time consuming part was chopping up the kale - which is a total pain in the butt to chop! - and the hardest part (for me, anyway) was cooking the veggies in the same pan as I'd cooked the chicken with out a) stuff burning, or b) just giving up and washing the pan before cooking the veggies in it. I can see the advantage to cooking everything in the same pan - fewer dishes to wash! - BUT with every new item you cook in the pan, the more stuff you have stuck to the bottom which just gets more and more browned/burned as the cooking continues. Not only is this a problem with the flavour of the browned/burned stuff getting on your new food, but as it gets blacker and blacker, so does the smoke which can set off smoke detectors and the like.

No, that didn't happen. This time. Anyway, I cooked the chiken strips and the veggies in the same pan, but when I saw that I was to cook the chicken and honey mustard sauce in the SAME PAN, I said, forget that and heated it up in the microwave instead. It probably wasn't as good as if I'd followed the recipe, but it saved me making (more of) a ginormous mess in the kitchen!

Another thing I did differently was instead of cooking up brown rice, I just made a box of chicken-flavoured rice because I'd forgotten brown rice takes an hour to cook. As it turned out, with all the chopping and cooking and agonizing over using the same pan over and over again, I could easily have cooked regular brown rice because I was well over an hour in the kitchen anyway! Gah!

But, in the end, the meal was delicious so it was all very well worth it: 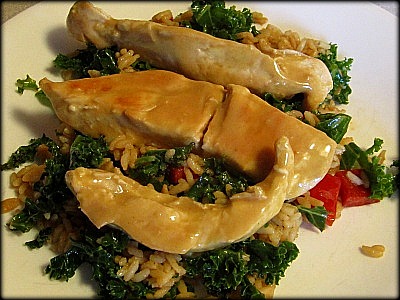