Over the course of this year, I have attempted to participate in various reading challenges. I thought at this stage of the game, I should probably check and see just how many challenges I succeeded in (or didn't).

The first challenge on my list is the Summer Reading Challenge  where I chose 10 books I had lying around to get read between June 20th and September 20th. Here is my post which included a list of the books I planned to read. As you can see, I did pretty well getting 6 out of the 10 books read. The other books are still sitting on my shelf and will likely end up on another challenge list next year!

The next several challenges were all listed on one post. They include the Speculative Fiction Challenge, the 2010 Flashback Reading Challenge, Support Your Local Library, the 2010 Challenge, the YA Reading Challenge, & tbr lite. I pretty much failed in all the challenges (and pretty much screwed up that page by trying to update it now; I gave up and just left it). To be honest, I kept forgetting I was even signed up for challenges, and just picked up and read books I either bought or had on hand, or heard about and picked up at the library.

That said, I did end up reading 42 books this year as of this moment (I am counting one that I havne't technically started yet, but will be starting this week and will likely finish before month's end.)! That's quite an accomplishment, I think! Check 'em out:

1. Saving the World and Other Extreme Sports by James Patterson (not started yet, but will this week)
2. If I Stay by Gayle Forman
3. Unwind by Neal Shusterman
4. Hunter Brown and the Secret of the Shadow by The Miller Brothers
5. Murder at Cuyamaca Beach by Sue McGinty
6. The Scorch Trials  by James Dashner
7. Sacred Scars by Kathleen Duey
8. Stoneheart by Charlie Fletcher  (currently reading, almost finished)
9. Lies by Michael Grant
10. To Kill A Mockinbird by Harper Lee
11. Speak by Laurie Halse Anderson (read for Banned Books Week)
12. Skin Hunger by Kathleen Duey
13. Redwall by Brian Jacques
14. First Test by Tamora Pierce
15. Here Lies the Librarian by Richard Peck
16. School's Out - Forever by James Patterson
17. The Iron King by Julie Kagawa
18. Impossible by Nancy Werlin
19. The Time Machine by H.G. Wells
20. Brains: A Zombie Memoir by Robin Becker
21. The Year Without Michael by Susan Beth Pfeffer
22. Except the Queen by Jane Yolen
23. The Princess and the Bear by Mette Ivie Harrison
24. The Constant Princess by Philippa Gregory
25. Salt by Maurice Gee
26. The Line by Teri Hall
27. Beautiful Joe by Marshall Saunders
28. The Purpose Driven Lifey Rick Warren
29. Coffeehouse Angel by Suzanne Selfors
30. Uglies by Scott Westerfeld
31. Radiant Shadows by Melissa Marr
32. Fragile Eternity by Melissa Marr
33. The Adoration of Jenna Fox by Mary E. Pearson
34. Wake by Lisa McMann
35. The Dead-Tossed Waves by Carrie Ryan
36. This World We Live In by Susan Beth Pfeffer
37. Twilight: The Graphic Novel, Volume 1 by Stephenie Meyer
38. Heat Wave by Richard Castle
39. Inkdeath by Cornelia Funke
40. The Lost World by Arthur Conan Doyle
41. Hunger: A Gone Novel by Michael Grant
42. Going Bovine by Libba Bray

I've been contemplating doing more reading challenges next year, but right now I'm too tired to even think about it, so I don't know that I'll bother. Unless, of course, I find some that just sound too fun. We'll see!

My Favourite Banned/Challenged Book: In the Night Kitchen by Maurice Sendak 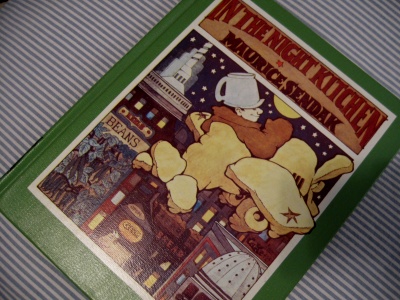 In the Night Kitchen by Maurice Sendak has been one of my all-time favourite books EVER! It's one of the first books I ever remember actually owning, not just getting out of a library or borrowing from friends, and was one of the few childhood books I've kept into adulthood. The copy I have was given to me by a librarian friend of my mom (who is a retired school librarian herself but was teaching Jr. High at the time) who apparently was asked/told/forced to remove it from the library at Hawthorne Elementary School. My mom can't remember exactly how the book came into our possession; I vaguely remember a lady coming to the house and giving me the book, then sitting and chatting with my mom while I looked at it.

(Then again, that could just be another false memory, like the one I have of being 8 or 9 or 10 and peeking around the corner of the hallway one afternoon and seeing a man with light blue pants and white shoes at our front door, who wanted to come in our house, but my mom said no and eventually closed the door on him. This DID happen; that man DID come to our door and harass my mother, but apparently I wasn't there to witness it. She just told me the story so often (don't ever let a stranger in the house!!) and with such intensity, that I created a memory to go along with it. Or so they say in shrink school!)

Anyway, I wish I could remember what, if any, reaction I had to seeing a drawing of a naked boy (OMG!!!) in my book, but I can't. I may have giggled, pointed. I may have blushed. I may have not noticed, being so enthralled by the story and the beautiful illustrations. I might not have cared. 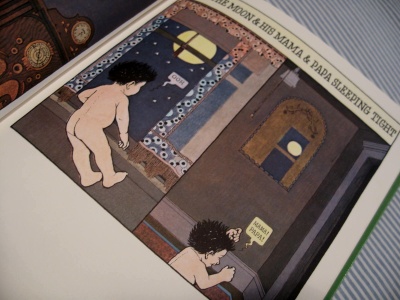 The basic story is a little boy named Mickey is sleeping in his bed one night when he is "awakened" by pounding downstairs. Suddenly he floats up in the air, loses his pajamas, and ends up floating into a bizarre night kitchen made from milk cartons, canned goods, and various kitchen utensils, where three big bakers (who all look like Oliver Hardy with Hitler mustaches) are mixing up batter to make cakes for the morning. Mickey falls in their batter and nearly ends up as part of the cake, but eventually escapes and, using his ingenuity, helps the bakers get milk for the cake batter. After his heroic adventures, as dawn is breaking, little naked Mickey returns to his bed (and p.j.s!) safe and sound. 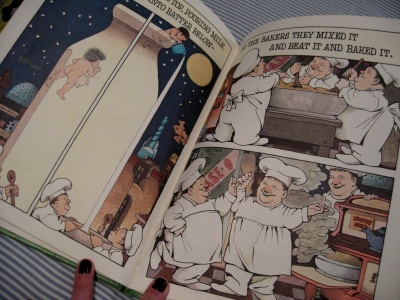 It's a charming, clever, adorable story accompanied by beautiful illustrations. Okay, yeah, I guess I can see how somepeople might be upset by drawings of a naked little boy in a children's picture book. After all, Sendak did not just show Mickey's bare bottom, but had a couple pictures depicting full-frontal nudity as well. But, the nudity was part of the story and honestly, haven't we all had dreams where we're running around (or floating) buck-naked? Are our private parts covered, blurred or otherwise censored in our dreams?

You don't have to answer that one if you don't want to!

Anyway, the sight of a little boy's pee pee in a children's book freaked some folks out to the point where some librarians (or well-meaning library patrons/teachers/principals/parents, etc.) took to drawing pants, shorts or even diapers over Mickey's little boy bits, which I personally find hilarious! Also, I feel really thrilled to have a clean, undamaged original copy of the book in my possession! And despite winning a Caldecott in 1971 as well as several other awards and accolades, In the Night Kitchencontinues to be challenged and banned all because a little boy ends up all nekkid in his dream.

I hope everyone had an awesome Banned Books Week and took the opportunity to read a book that some people might consider in some way, shape or form to be inappropriate or dangerous.

In honour of Banned Books Week, here's a list of thirteen books I've read over my lifetime which have, at some point, been challenged or banned from classrooms and/or school libraries:

Lists of Frequently Challenged Books can be found here. Check it out! You may be surprised by some of the books on those lists - I know I was! 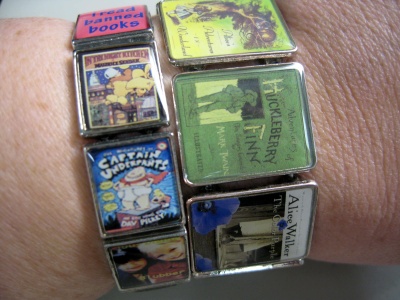 In celebration of Banned Books Week, I purchased two bracelets made by Carolyn Forsman. The stretchy-banded bracelets feature sevearal children's and adult books that have been challened or banned. The kid's bracelet has:

And the adult bracelet has:

I kinda wish the kid's braclet had only one "i read banned books" tile and included one more banned/challenged book cover. Along the same lines, I wish BOTH braceletes had one or two additional tiles just to make them a little less tight. Still, I love them both and I'm thrilled I got them in time for Banned Books Week! 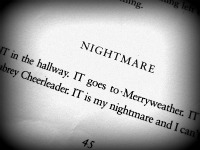 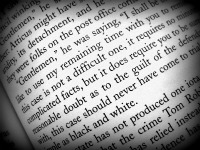 This Tuesday, in honor of Banned Books Week, I'm reading two books that have been banned and/or challenged: To Kill a Mockingbird by Harper Lee and Speak by Laurie Halse Anderson.

First, my teaser from page 231 To Kill a Mockingbird:

"Gentlemen," he was saying, "I shall be brief, but I would like to use my remaining time with you to remind you that this case is not a difficult one, it requires no minute sifting of complicated facts, but it does require you to be sure beyond all reasonable doubt as to the guilt of the defendant. To begin with, this case should never have come to trial. This case is as simple as black and white."

I see IT in the hallway. IT goes to Merryweather. IT is walking with Aubrey Cheerleader. IT is my nightmare and I can't wake up. IT sees me. IT smiles and winks. Good thing my lips are stitched together or I'd throw up.

In Preparation for Banned Books Week ...

... I picked up two books to read next week: To Kill a Mockingbird by Harper Lee (which I'm sure I've read before, but would like to read again, plus Kathleen Duey said it had one of the best middle-grade-aged main character voices, and I'm interested in that) and Speak by Laurie Halse Anderson, a heavily challenged book that everyone is in quite a tizzy about currently. Since I've never read Speak, I'm curious as to what all the fuss is about. 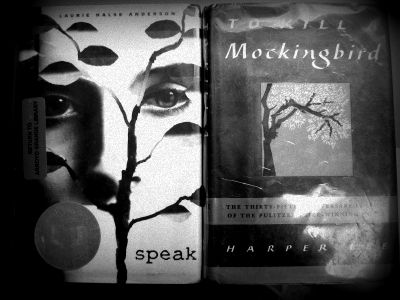 You can read more about Banned Books Week here, and check out a list of the Ten Most Frequently Challenged Books in 2009. Then go pick out a banned or challenged book (or two or three!) and celebrate your freedom to read whatever you like! Thank you, First Amendment!!