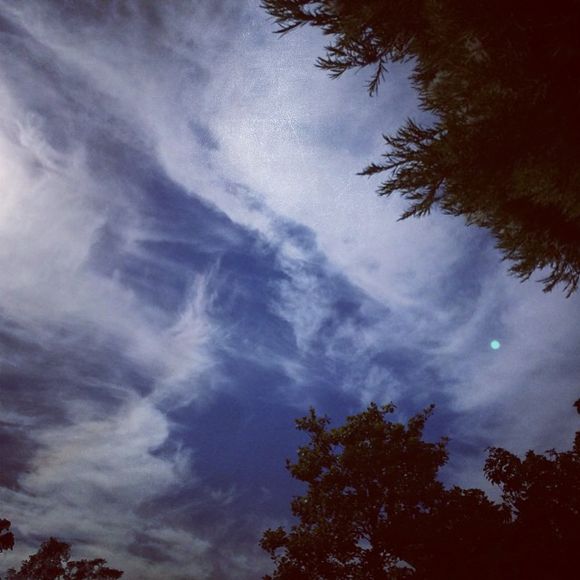 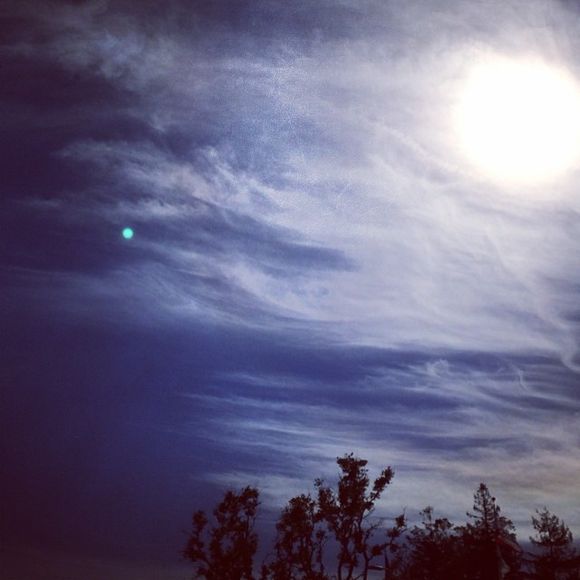 Wow, I can't believe it's the last Friday in June already!  How did THAT happen?!? I'm now 13 (well, technically twelve-and-a-half) days from my Summer Vacation, and I'm excited and stressed at the same time. So, here's my Friday Five for the week containing some things I've managed to get done, and some things that might not get done.

1.  Wednesday I got my vision checked, and ordered some new prescription sunglasses, which will hopefully make driving much easier. I also decided to go with progressive lenses, so I should be able to see in the distance as well as up close. It'll be nice to not have to take my glasses off and put on readers to, say, read a menu at a sidewalk cafe. If I like the sunglasses, I'll have my regular glasses done that way as well. The only problem with that is, they'll have to take my glasses, as those frames aren't available anymore, so I'll be blind for a few weeks. Still, that's a project for AFTER my vacation!

2. I ordered some packing cubes which will hopefully make packing and travelling a lot easier! Since I'm driving across Washington state, I'll be staying in several hotels along the way, so I needed a fast and easy way to pack and organize my clothes.

3. I realized on Tuesday I screwed up the dates on my car reservations, and panic ensued! Luckily I was able to not only fix it, but managed to still get a convertable! (And, yes, I realize now that I will not be driving around the perpetually sunny central coast of California where it does not rain in the summertime, but instead across the state of Washington where, okay, now that you mention it,  I do recall we periodically got summer thunderstorms. So, if it rains for a full week up there this July, you can blame me.)

4. So a couple weekends ago, I finally decided I'd better get reservations at a hotel in Colfax, but, oops, guess what? They're booked! Of course! It's a huge event, and there are only two hotels in town (which is actually up form the 1 they used to have!), what was I thinking?!? Gah! So, I booked a hotel in Pullman, knowing that it'll be a pain to drive back and forth, and possibly not having a chance to shower after the colour run on Saturday. But! I kept checking every day or so, just in case a room became available. Tuesday was that lucky day for me, and now I can relax even more about my trip!

5. Finally, I still have so much to do, and I might end up not doing a bunch of stuff just to take some of the pressure off. I wanted to get my eyelashes dyed, as I thought that might save me a lot of getting-ready time during my trip, but I don't know if I'll be able to fit it in. Also, I was going to get my hair cut and dyed like this:

(Photo of Emma Stone ganked from some gossip site; don't know who's picture it is, but I know it's not mine.)

But again, time is quickly sliding by; tomorrow is booked and next Friday is booked, too (as well as being a holiday, so there probably wouldn't be any salons open anyway), and, and, and ... I might end up just dying it myself and getting a quick trim at Fantastic Sam's, as per usual. What do you think? Should I go for it, or not?

Anway, phew! I'm exhausted just writing all that! Still, I'm SO looking forward to this vacation, and I can hardly wait! What are your summer vacation plans? 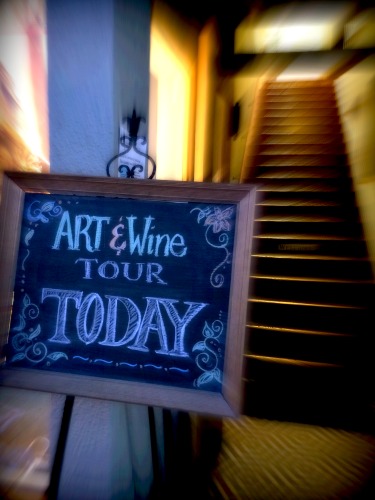 Recently mom and I attended the quarterly Art and Wine Tour in downtown Atascadero. It was such a fun evening tasting a variety of locally produced wine, meeting local merchants, checking out new little shops, and perusing the talents of local artists.

There were 20 wineries pouring, but unfortunately we didn't get to all of them before the Tour concluded at 8:30 (it really should just go to nine; it's Friday night after all!), but we managed to hit  a little more than half of them. There were some of our old favourites:  Pomar Junction (with their delicious Picnic Chardonnay!), Hidden Oaks, Eberle, and Castoro Cellars; a few we've tried before and liked:  Whalebone, St. Hilaire, and Lone Madrone; and some new ones I'm pretty sure we've never tried before: Pear Valley, Calcareous, Bianchi, and Tolo Cellars. 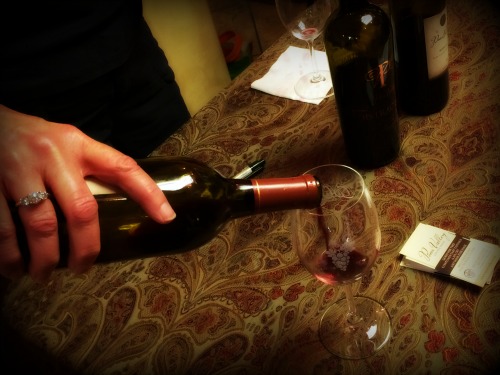 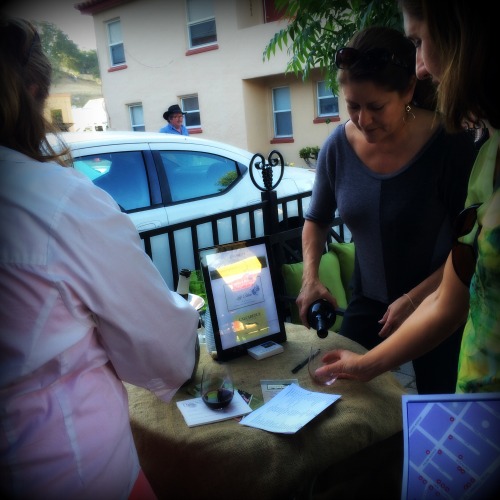 The weather was perfect for the Tour: sunny and warm, but just starting to cool off, and little to no wind! There were tons of people there, I think more than I've ever seen at one of these events. It was so nice to see so many people come out. Our downtown is struggling, to be sure, but it's quaint, friendly, and hosts several really nice, unique, fun shops!

During the last Tour back in March, I think it was, this little store appeared to be closed. I was very sad because it's one of my favourite little shops in town. I'm not sure if they were just on vacation, changing hands, updating inventory, or what, but Times Since Remembered was back and filled with delightful things!!! 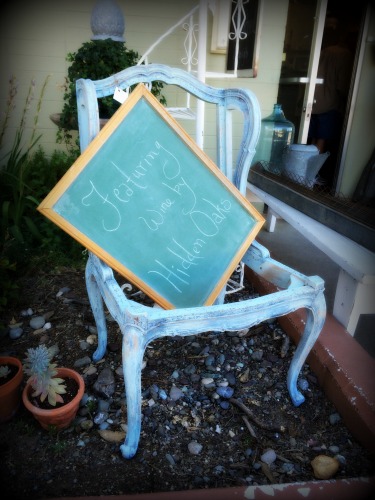 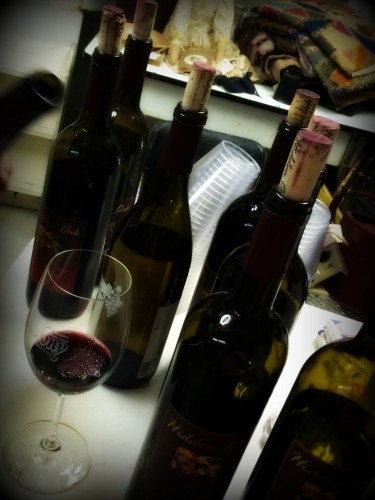 Rhonda's Relics is a brand new little shop that has lots of unique, vintage items as well as quaint gifty things. I really hope it does well! 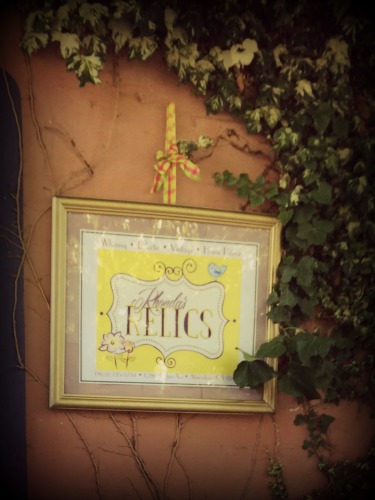 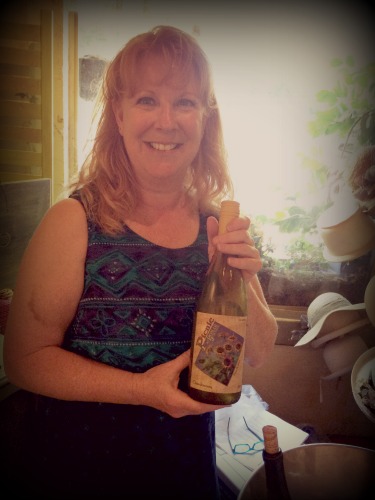 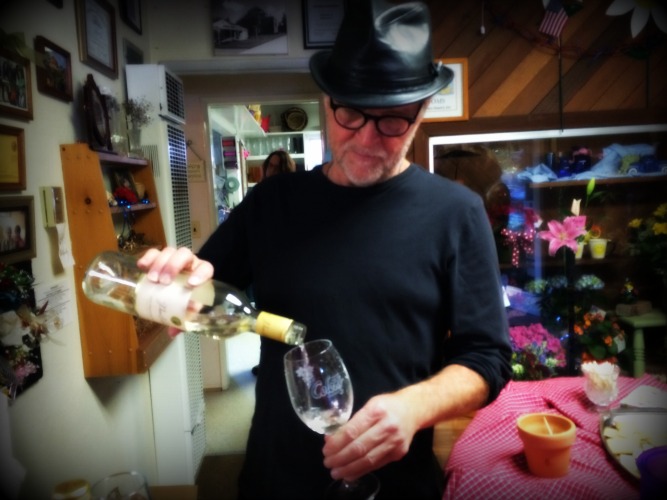 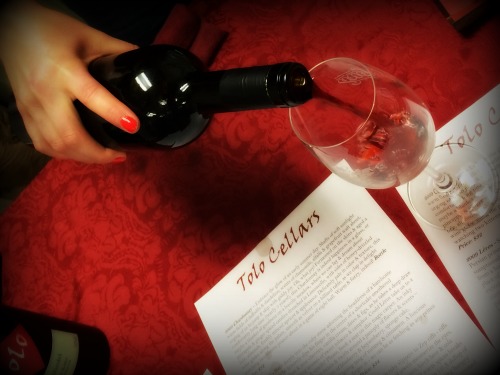 I've never been to the patio area behind The Spa Central Coast and  Avian and Claw (formerly Haven Wine Bistro), but it was quite lovely! Lots of seating and there were two wineries pouring there: Whalebone and Nobelle Wines. 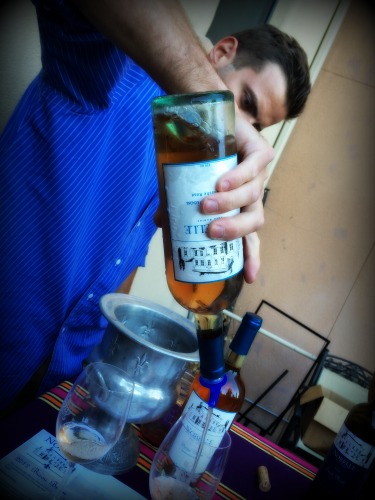 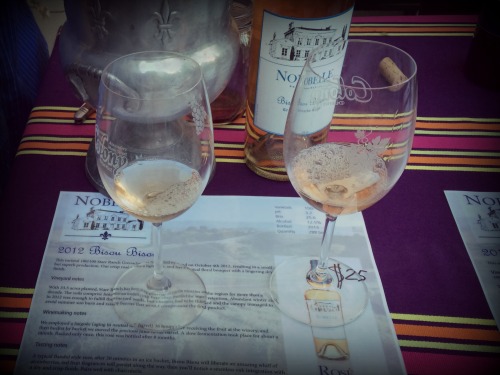 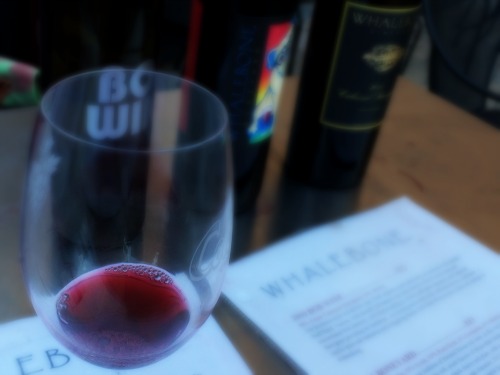 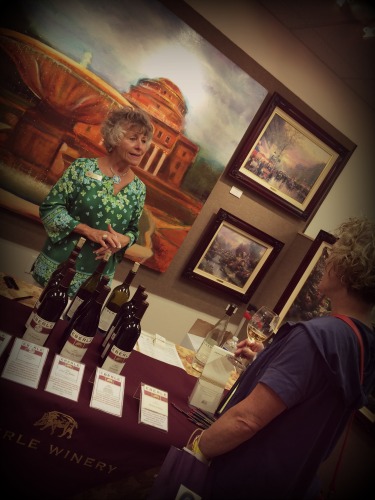 When I first saw this paper-wrapped bench outside Envisions Gallery, I assumed it was a newly installed bench that hadn't been unwrapped yet. But when Iw ent around the corner and saw a wrapped up bicycle parked by the building and a small car wrapped up in front I realized it must be an art display! It was called Wrapture by Chris O'Mahony, and I thought it was quite clever! 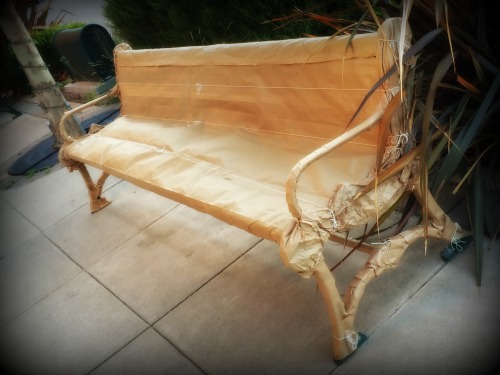 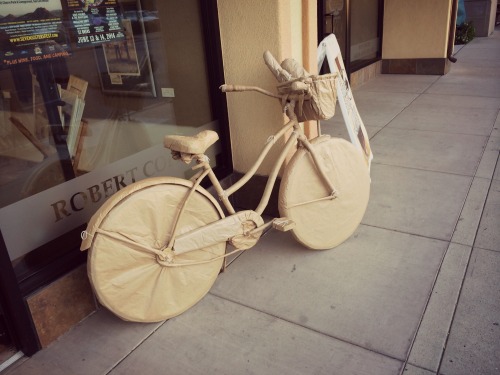 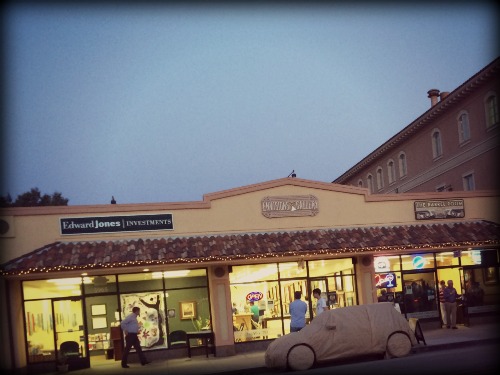 Garth Wilwand  played some great tunes in the atrium between Wilwand Tea Co. and Healing Arts and Grape Encounters Empourium.  I tried to post a video of him singing "Message in a Bottle" to my Instagram, but I screwed it up, so you'll have to check out his music on his website linked above. 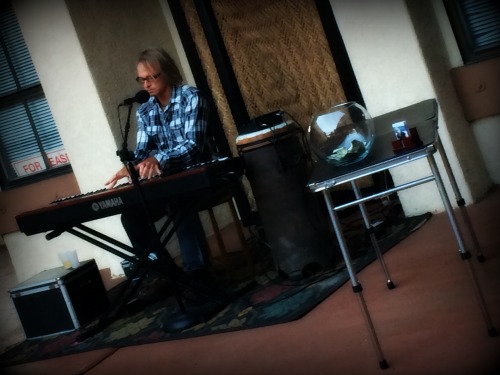 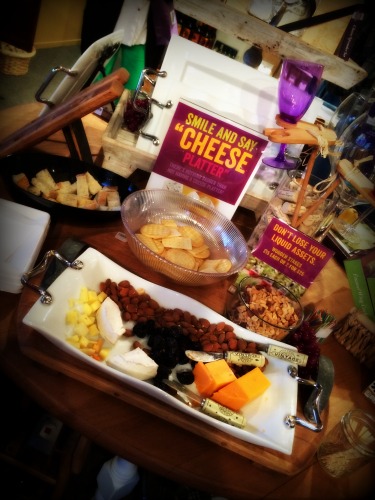 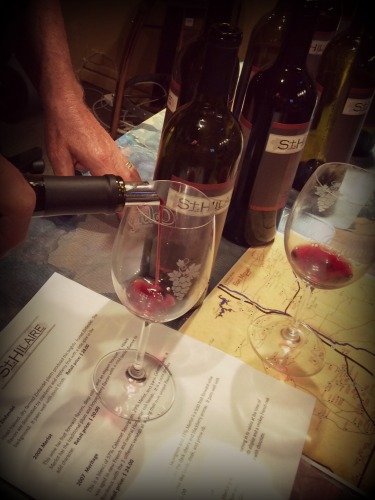 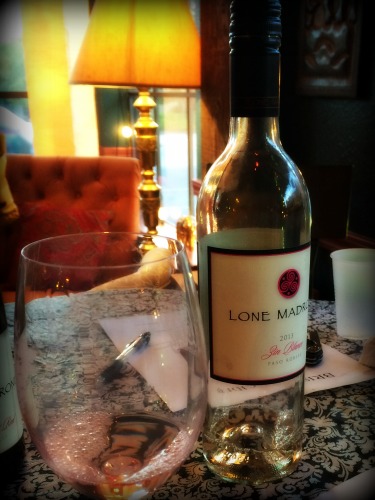 So, it was a super fun night, but wow, that was a lot of wine! When we got home we noticed that the glasses we'd been given were even bigger than the Big Wine Glasses we got at another wine tasting event (though not quite as big as the Ginormous glasses we got at the last Atascadero Wine Festival we went to several years ago).  Just for fun I did some photo comparisons. The newest glass is the one on the left. 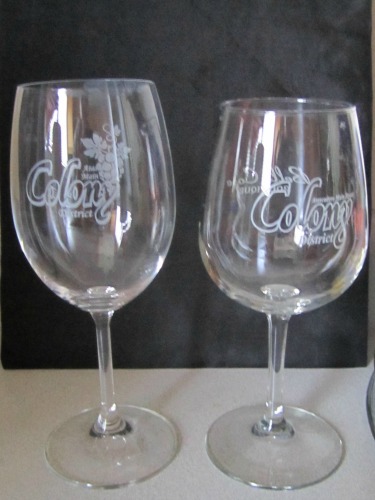 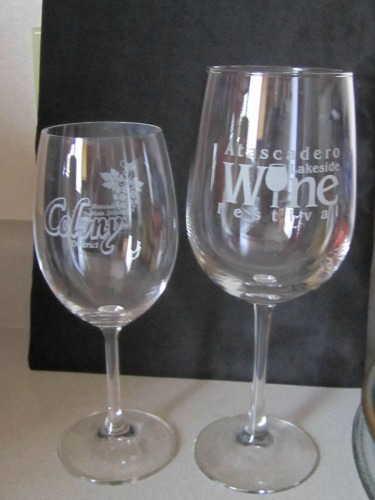 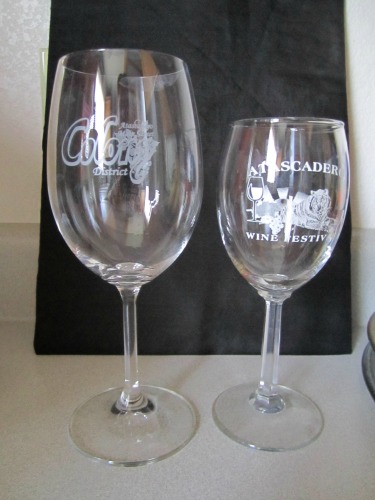 The first picture has the glass from a few years ago on the right (don't remember if it was the Art and WIne Tour or Sweetheart Stroll). This is the one we consider the Big Glass and is also our Friday Glass, because by Friday I really need a nice big glass of wine! The Ginormous glass is in the second picture, and I think breaks some kind of world record for the largest wine glass ever! Oh, and that teeny tiny glass in the third picture is the original size of wine glass we used to get at wine festivals/tasting events. Why they ever changed is beyond me! The bigger ones are so cumbersome when you're walking around trying to drink wine, eat food, take pictures and look at stuff.  Maybe next time we'll just remember to take some of our own glasses!

So, yeah, it was fun. Too much fun! I was planning to go to the Central Coast Oyster Festival in Avila Beach on Saturday, but woke up late in the morning just exhausted from what was really a busy, busy week that actually started the Friday before, and decided to not bother. Just the thought of spending hours fighting my way through throngs of people in the sun and heat for a few oysters and a couple cocktails just didn't sound as fun as it had on Thursday! Oh, well. Maybe next year! 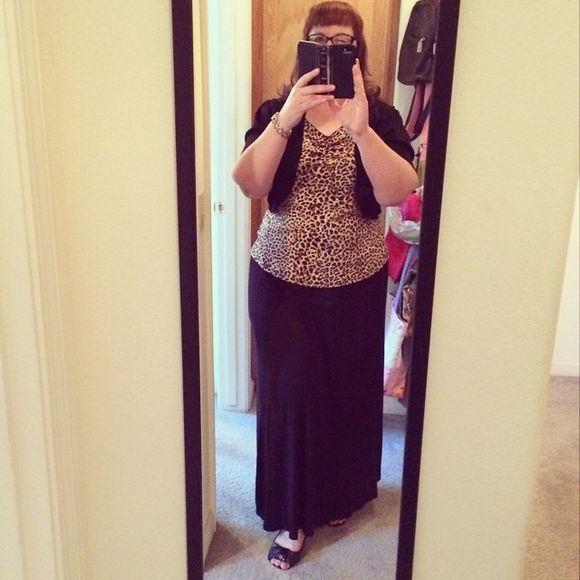 I only call it a Freaky Friday Five because I'm FREAKING OUT about my upcoming activities and  vacation! Naturally I've left EVERYTHING for the last possible minute and I'm seriously stressing like mad!

1. The Good: I finally have all my hotel and auto reservations for my trip to WA state and class reunion in July. The Bad: I procrastinated too long and didn't get a room in Colfax for Friday/Saturday, and instead have to stay in Pullman, and drive back and forth. Also I stupidly only reserved my car (requested a convertible like a Mustang!!) through the 2oth when I'll be in Coeur d'Alene for the weekend and the resort has an airport shuttle I can take on Monday. Now that I've changed my mind, the car I want is not available for the two additional days, and there are no more convertibles available at all. grr. The Ugly: Since I didn't get a room in Colfax and will have to check out Saturday before the Colour Run, I'll be a hot, colourful mess while roaming through the rest of the Concrete River Festival, and later driving to Coeur D'Alene and checking into the Resort. Should be fun.

2. The Good: Yes, I signed up for two more 5Ks: The Wild Run, a fundraiser for the Charles Paddock Zoo in Atascadero held on July 4th and sponsored by Kennedy Club Fitness, and the Colour Run (technically I'm doing the "Fitness Walk", but it's still the 5K distance) in Colfax on the 19th. The Bad: Despite having one 5K under my belt, I'm nervous as hell for the upcoming Wild Run. Don't ask me why because I don't know. The Ugly: See The Ugly in #1 about not being able to run to my hotel room and shower after the Colfax Colour Run and before travelling to Coeur d'Alene Resort.

3.  The Good: I discovered though my friend MoPie, a possible time-saving beauty treatment: eyelash tinting. My eyelashes are veryvery pale and not terribly long and.or lush, so when I don't wear mascara, I look like I don't have lashes at all, and generally just look hideous. But putting on mascara takes time, is often messy, and even when using the waterproof stuff, usually smudges, smears, or gets wiped off  because my eyes water constantly.  The Bad: Naturally I've waited until the last possible minute to consider getting this procedure done, and while I've found a place in Atascadero that does it. I'm cutting it close to actually being able to get an appointment before leaving for vaycay. The Ugly: not sure there is one for this, except maybe just not being able to get an appointment and/or an allergic reaction to the dye. We'll have to see.

4.  The Good: In other, non-vacation news, I've been doing pretty well at wearing more skirts and dresses to work as per my June Resolutions. I've even received compliments on a couple outfits! The Bad: I'm still not very comfortable in skirts and dresses, which was really the goal of this resolution, as I hoped to dress nicer more often. The Ugly: My legs are really fat and ugly, so the shorter dresses/shirts will probably only be worn once, if at all, and if so, probably never again.

5: The Good and the Gorgeous: my red tea roses have decided to bloom again, and both plants look great. My Midas Touch rose looks fabulous, as always! Cheers! 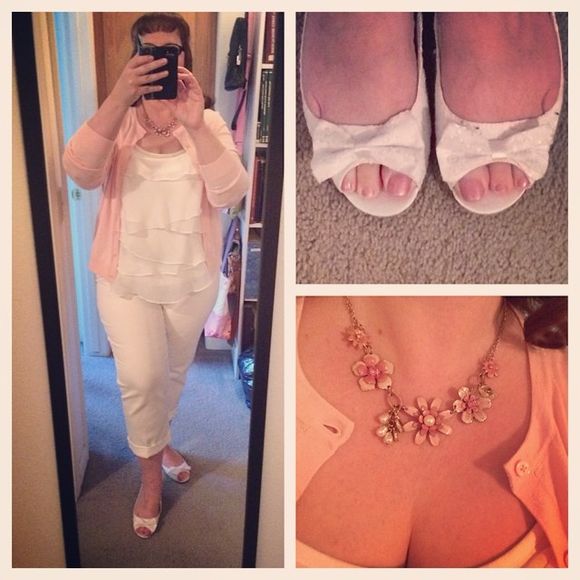 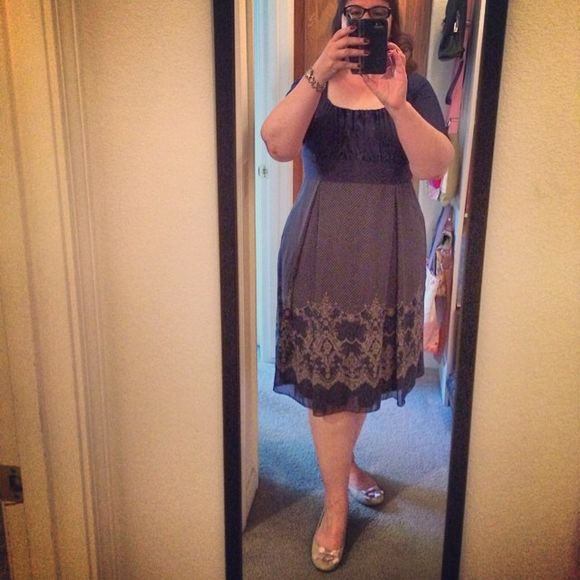 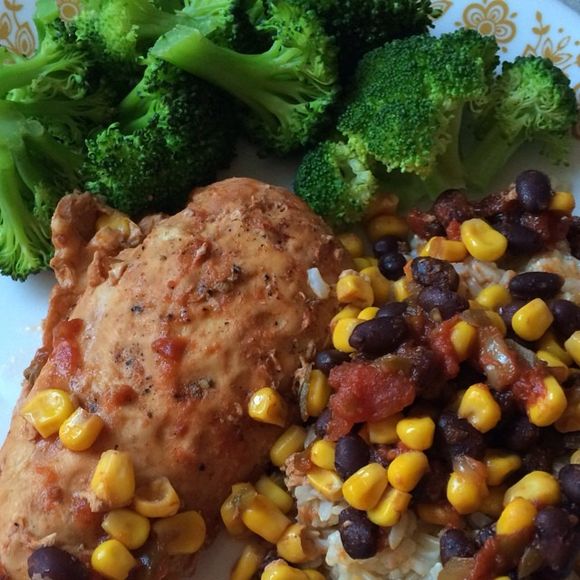