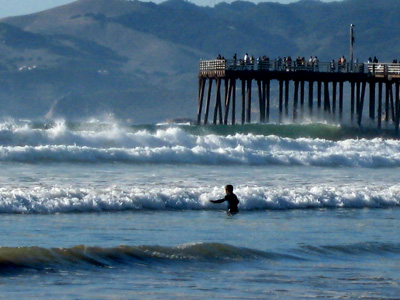 Teaser Tuesday: The Curse of the Holy Pail by Sue Ann Jaffarian

My teaser sentences this week are from page 37 of The Curse of the Holy Pail by Sue Ann Jaffarian:

"Listen to me," he said, looking straight at me, his shyness gone. "Every owner of the Holy Pail has died."

"Bert," I said, thrusting my arms out in front of me palms up in a plea of frustration, "it's just a danm lunchbox!" 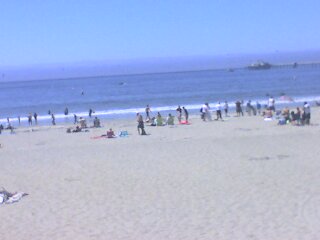 Friday Finds is sponsored by MizB at Should be Reading.

This week I came across three new titles while looking for books two and three of George Bryan Polivka's Trophy Chase Trilogy (I've read The Legend of the Firefish and really want to read the other two books!):

The first book, The Restorerby Sharon Hinck, is about an average, everyday "soccer mom" who ends up in another world after being sucked through a portal. After reading the blurb, this sounds similar to Minerva Wakes by Holly Lisle, a book I really enjoyed (but haven't read in a long time, so don't quote me on anything), but has a strong Christian theme. Another Christian fantasy book, Faith of the Unforgottenby Leathel Grody, popped up as a recommendation when I was reading the blurb for The Restorer, and it looked really good, too. It's got dragons, which is always a plus! Of course both of these are the first book in their respective series, so there's many more books for me to put on my Wish List! Yay! Finally, Blaggard's Moon is by the same author as the The Trophy Chase Trilogy and apparently has one of the characters from that series in it. Now that this book is on my list, I REALLY have to get my hands of the other two Trophy Chase books!

Bad, Bad, Bad and Yet SO Good! 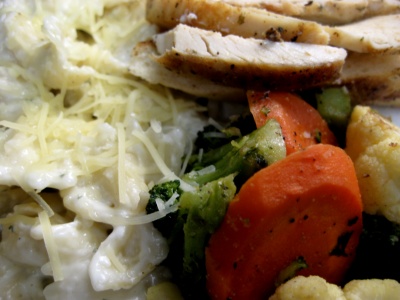 This is my lunch today: grilled chicken breast with grilled veggies. See? I'm being all healthy and stuff!

What's that? Oh, that stuff on the left? Um, yeah, well, that would be buttered pasta with Alfredo sauce and parmesean cheese. I HAVE NO IDEA HOW THAT GOT THERE!

Currently I've only been able to find these in hardback, although I know Brisingr and Inkdeath are both available in paperback. My guess is the bookstores want to rid themselves of all the hardback copies before offering the paperbacks. Grr.

I'm thinking of just borrowing them from the library and saving myself some money (and frustration)! I'll have to wait, though as I currently have 3 TBRs to get through before I get (borrow/buy, whatever!) any more books!

Teaser Tuesday: Too Big to Miss by Sue Ann Jaffarian 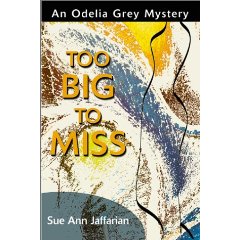 My two teaser sentences come from page 8 of Too Big to Miss by Sue Ann Jaffarian:

The new os her suicide rocked my tiny rut-filled world.

So, how was YOUR 4th of July weekend? Good? Great! Mine? Oh, it was LOVELY, thanks for asking! Since the 4th fell on a Saturday, we had Friday off as a holiday, and I took yesterday off as a vacation day - that's FOUR DAYS OFF IN A ROW for those of you playing at home. OMG, it felt SO nice to be away from the office and all the damn childish DRAMA that's been going on lately! I've been SO sick of all the petty games and passive-aggressive behaviour coming from one person in particular. Gah!

It wasn't all fun and games this weekend, though: Friday we had to get mom's car smogged (Lexie (yeah, my mom's car is named Lexie; mine is Misty Storm for those of you wondering) passed with flying colours!!) and later I had a visit with my eye doctor (and while I didn't pass with "flying colours" my cronically broken eyeballs are getting better. again.); Saturday we visited the g'rents and went grocery shopping; Sunday we mowed the lawn; and yesterday I reslisted my stuff for sale on eBay and was scheduled to meet with my trainer at 4. By 3:30 I was really regretting that decision because I would much rather have just stayed in my jammies, but I got dressed and headed off to Kennedy Club anyway.

He wasn't there when I arrived. I figured I'd gotten the time wrong and that we were really meeting at 4:30, so I just hopped on a treadmill while I was waiting. After a (really awesome, sweat-inducing) half hour of that and still no trainer, I started thinking maybe he cancelled on me. I didn't recieve any calls at home and there were no messages on my cell.  Maybe he left a message at my work number, I thought. I wouldn't get that since I was on vacation, but it would make sense because I knew he'd penciled me in for 4 today instead of the usual 6, and he is not a flake. So, I hung out till nearly five, just in case, then I left ... and headed straight to Le Nails for a pedicure! 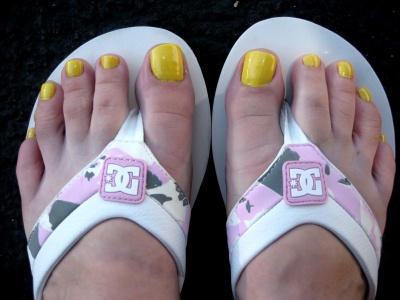 The colour is called Sunshine and is a new offering from Avon. I wasn't sure at first if I really wanted yellow toenails, but in the end, the bright, sunny, colour won me over. It's perfect for summertime and for my new cheerful, carefree, and somewhat weightless attitude. I'm not 100% sure when things changed and went from being same-old-same-old to, well, shiny and new.

Maybe it's because I'm finally through that nasty plateau and have been losing weight again.

Maybe it's because my endurance during workouts is increasing and I'm feeling better after working out rather than just achy and wiped out.

Maybe because after dealing with of all the bullsh*t that's been going on with a now-former friend, after a lot of crap and slanderous statements and hurt feelings and getting the cold shoulder and dealing with juvenille-style temper tantrums, I finally decided to just let it all go, and let this now-former friend act like a spoilt five-year-old brat if that's what she wants to do, and not let her passive-agressive antics affect me in any way, shape or form.

God, I feel 10 pounds lighter just writing that down, so yeah, I think that might be it.