So, recently I asked my blogging friend Mary for 5 Words to help inspire me to write an entry. She'd gotten some of her own from a fellow blogger, and I thought it was a great idea. Now that I have them, however, I find myself lacking other words to go with the five she gave me. This should be a piece of cake since they are relatively easy words. I mean, she gives me tomato, and lo and behold, here I am blogging about our massive tomato plant and all the delicious fruit bursting forth from it.

She also gave me family, has always been a very important part of my life, and has been particularly foremost in my mind the past couple of weeks. First off, about a week ago I recieved a letter in the mail from my father's brother informing me of an upcoming family get-together for my Aunt Alice's 95th birthday (which was actually in January, but they're just throwing the party now, probably because the weather's better in South Dakota now than it was in January). I used to hear from her at least once a year - usually at Christmas - but hadn't for a couple years. I knew she'd had a couple strokes and was living in a home, and I figured she was just too incapacitated to write, or had passed away. I honestly don't expect this side of my family to inform me of such things, so I was surprised to get this letter. And very happy to learn my favourite Aunt is still alive and well!

Next, last Friday would have been my daddy's 74th birthday, which is really hard for me to imagine since he died when he was 45 (technically 46, but we don't really count those last couple of weeks between his birthday and his death-day since he was heavily medicated and really out of it). I find it hard to imagine him as an old man! I also find myself still missing him a great deal even after all this time.

Finally, this past Sunday was my grandmother's 94th birthday. (Yes, you are reading that right: my father's eldest sister IS older than my mother's mother! She's older than my mother's father, too, who is still 93.) To celebrate, mom and I bought Subway sandwiches, a pasta salad, watermelon and angelfood cake with whipped topping, and had a nice quiet lunch up my grandparent's house. Later I stepped outside to see how their tomato plants were doing: 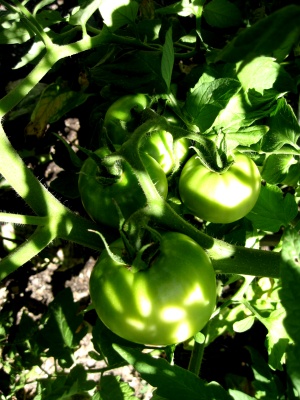 They're doing great, btw. They have three ginormous plants all of which are loaded with tomatoes! Soon my grandparents will have more tomatoes than they know what to do with!

Another word Mary gave me was fantasy, which is the genre of novel I prefer. In fact, I've been reading a lot of really good fantasy novels lately:

Mary also gave me the word ocean, possibly knowing how very much I love the ocean, how I could stare for hours (and have, actually) at the waves coming in and going out, how I enjoy getting my feet wet despite how cold the water is, and how I love to photograph it: 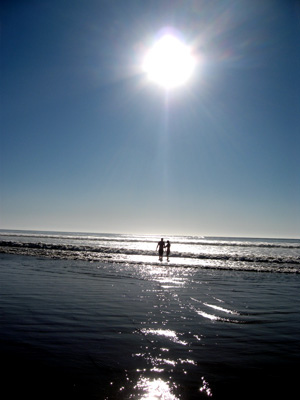 The last word Mary gave me was composition, which I thought would be difficult to incorporate into this post, but actually I’ve managed to compose a pretty good entry. Ha! j/k.  Anyway, the kind of composition I normally do is in my photography. My mom says I have a gift when it comes to taking  pictures. I guess I do … but, sometimes I just get a lucky shot … 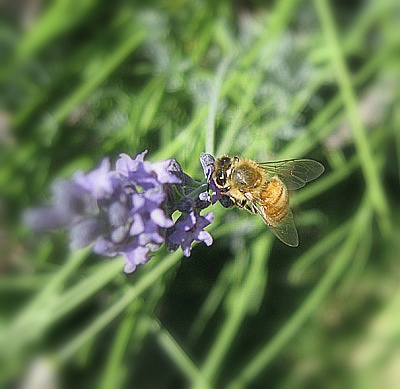 … other times I agonize over the arrangement and spend several minutes rearranging stuff and several shots from different angles to get it just right. 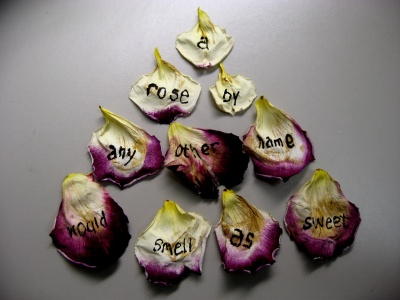 Thanks for the five words, Mary! See you in Wisconsin in October???

Our garden looks pretty good considering how dang hot it's been the past couple of weeks: 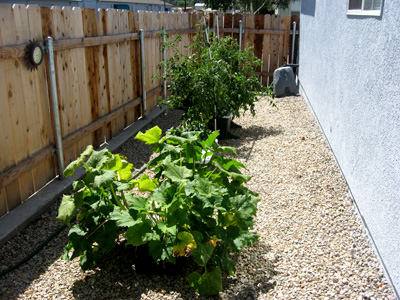 The Early Girl Tomato plant has recovered from the brink of death and is even producing some beautiful tomatoes: 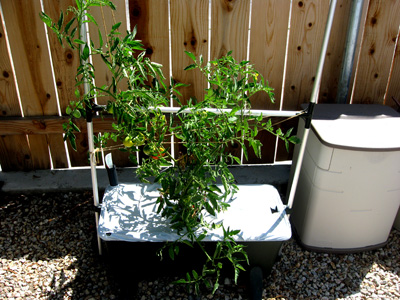 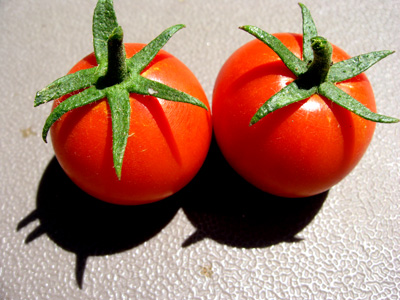 The zucchini plant looks like it might be on its last legs, but it's still producing as well: 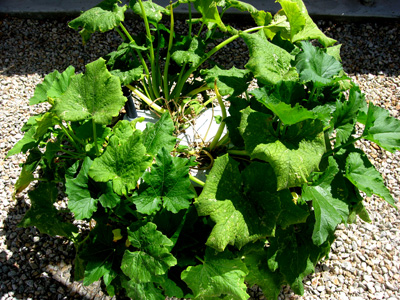 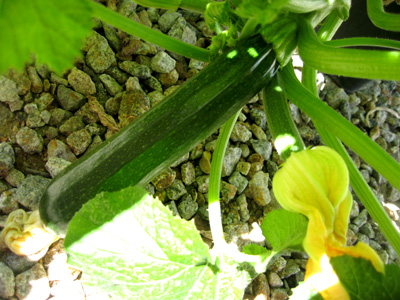 The little pepper that is sharing an Earthbox with the zucchini never really got too big, but I got a good-sized pepper out of it today: 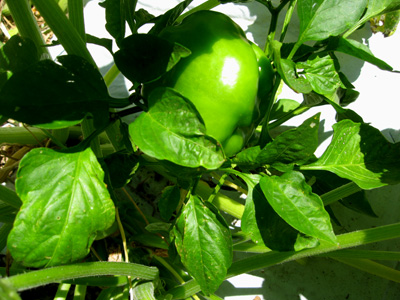 The other two pepper plants just don't seem to be growing which is making it difficult for the peppers to get too big. They're nice, but I don't know that I'll be stuffing them. 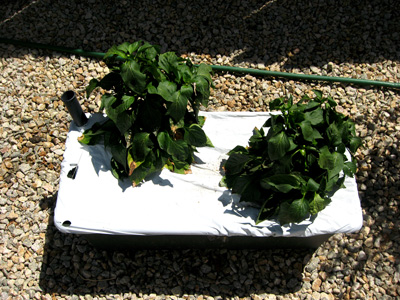 Can you believe this is just ONE tomato plant? 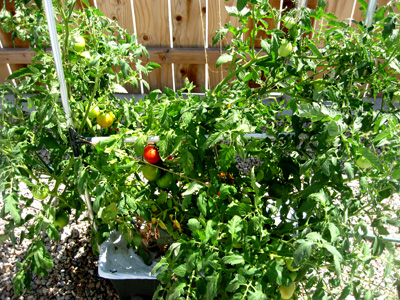 There are some really big tomatoes on there and several that were ready to be harvested. Unfortunetly we lost about three little toms to rot. I have no idea how it happened, but they were beautifully red and perfect on top and soggy and brown on the bottom. *shrugs* 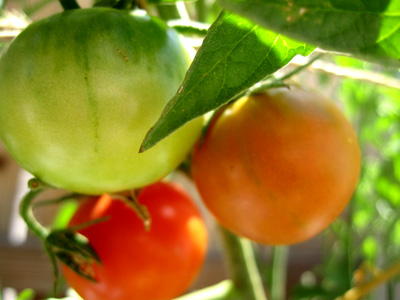 Still, we ended up with a pretty good haul today: 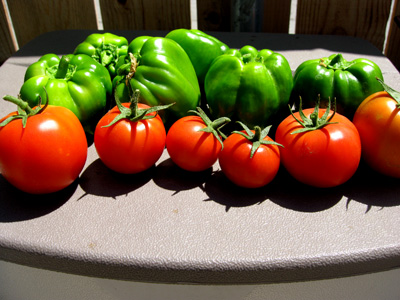 Inthe rest of the back yard the lavender is gorgeous this year and is buzzing with bees: 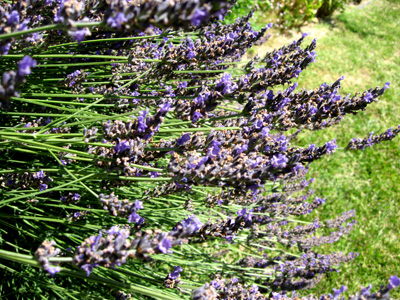 And this plant hasn't bloomed for a couple years, but mom threw some old garden dirt around the base of it and now it's just exploded! I've noticed a couple humming birds like to visit it as well: 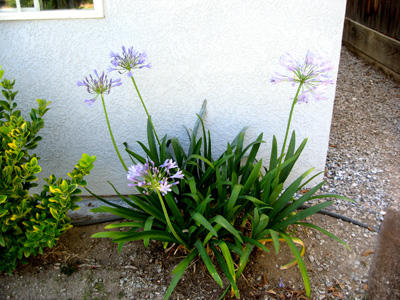 Posted at 12:12 in Earthbox, Flowers & Gardens, In the Garden, Photography, The Earthbox Garden | Permalink | Comments (1)

Here it is, ladies and gentlemen, our first tomato of the season: 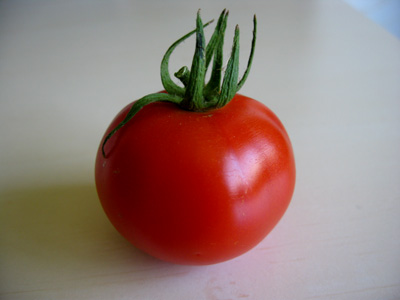 There are plenty more that will probably have to be brought in tomorrow, but this is officially the first!

Posted at 14:10 in Earthbox, Flowers & Gardens, In the Garden, Photography, The Earthbox Garden | Permalink | Comments (0) 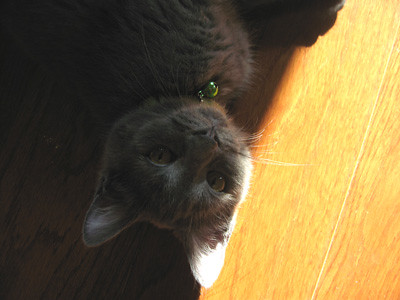 This week's finds are: Prophesy of the Sisters by Michelle Zink (found at Ecclectic Book Lover who is also hosting a giveaway contest for this book), Dark Destiny: The Sleeping Beauty Story Your Mother Never Told You by Kim Hackenberger and Melody Lowe (found at Jaime's blog), and Wake by Lisa McMann (I can't remember where I saw this one). They all sound really interesting, and I just might have to wander down to B&N at lunchtime today and see if I can find any of these. I still have $7.00 on a gift card to use and it's starting to burn a hole in my wallet!

P.S. I don't know why the pictures are lining up properly. Sorry.

This week at Booking Through Thursday we're asked: Which do you prefer? (Quick answers–we’ll do more detail at some later date)

I found it hard to stick to "quick answers" as I wanted to elaborate on my responses! 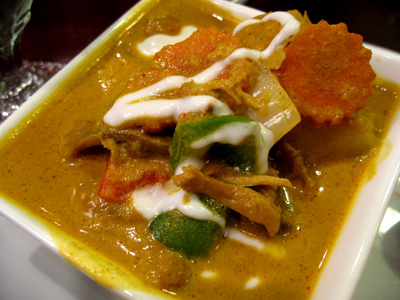 I went out to lunch today with some girls from work. We went to Thai Palace for some curry. I ordered the mild yellow curry with chicken EXTREMELY mild and it still made me sweat! It was delicious, though!

I grabbed this book off the shelf simply because of the cover. I loved the contrast between the proper, Elizabethan attire, and the modern-day sunglasses stuffed down the front of the gown and the big, pink bubble the girl was blowing. After reading the blurb I knew I had to buy it (and I have read and enjoyed it), but I never would’ve picked it up if the cover hadn’t been so cool!

My teaser sentences this week come from page 94 of The Wild Wood by Charles de Lint:

Most people thought of the country as quiet and she supposed that, relatively speaking, when compared to urban streets, it was true. But when you lived as close ot the forest as she did, you quickly understood that it was never really quiet; there were always frogs trilling, insects cheeping, trees creaking, winds muttering, grass rustling, wolves and coyotes howling, birds choursing, and a hundred other sounds whispering across the landscape with the same busyness as might be found on a city street. 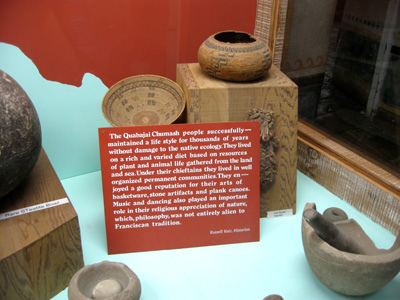