Poem in Your Pocket Day

As National Poetry Month comes to an end for 2009, we celebrate with A Poem in Your Pocket Day, where people are encouraged to carry around a poem with them all day and perhaps take it out and share it with someone. I chose How Do I Love Thee by Elizabeth Barrett Browning: From Shakespeare's Romeo and Juliet: 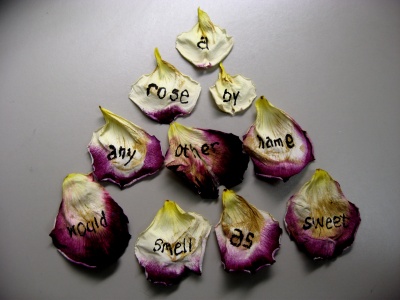 For this week's Teaser Tuesday, I'm still reading Powers by Ursula K. Le Guin. It's starting to get very exciting and intense! From page 119: 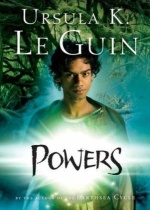 Sotur's brothers and Torm came riding from Etra all in haste and full of alarms and orders: We must pack up tonight and leave the farm first thing in the morning; maurauders from Votus had crossed the Morr and burned the vineyards and orchards of Merto, a village not ten miles south of Vente. They could be here at any moment.

The Little Project That Became a Big Project

After spending a couple hours browsing various shrubs/plants/etc. in Home Depot's garden department yesterday, my mom and I finally decided to just move a couple pots of ivy to the front to keep my Midas Touch rose bush company. We may eventually put a couple new shrubs in front, but since we were unable to make a decision (and were basically overwhelmed by the number of choices), this is going to have to do it for now. 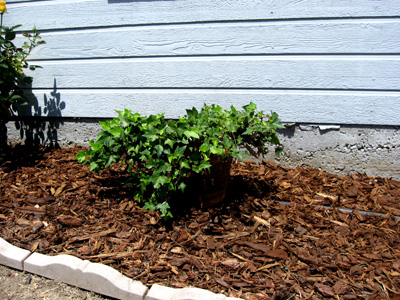 They look really good, but we're going to pick up a couple stepping stones for them to sit on next Saturday.

Unfortunetly, it made for a real mess in the back where they were before: 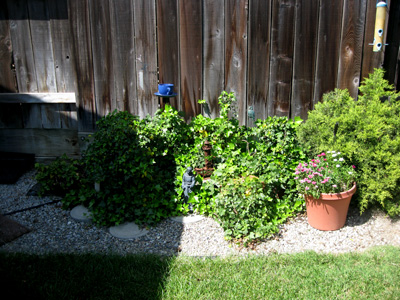 As we were trimming up the ivy in the pots, we discovered that the ivy had grown out the bottom of the pot and into the ground. As we tried to clean that up, we ended up making even more of a mess, and finally just wound up taking out almost all the ivy plants and cleaning up the whole area. Now, we're in the process of putting stuff back - we're keeping three of the ivys and will add pots with flowers and put our statuary back later, but now it's just too dang hot, so we're quitting for the day. So we now have a bit of a work in progress: 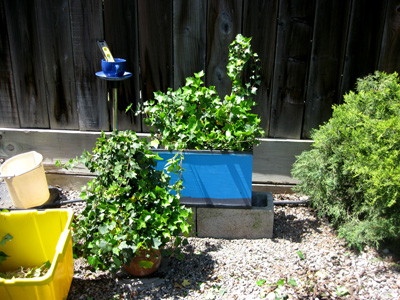 Eventually it'll be real pretty again, I promise! In the meantime, I will leave you with some pretty pictures of our wild roses: 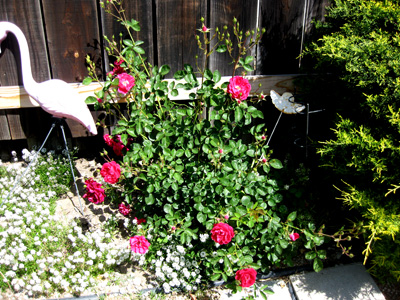 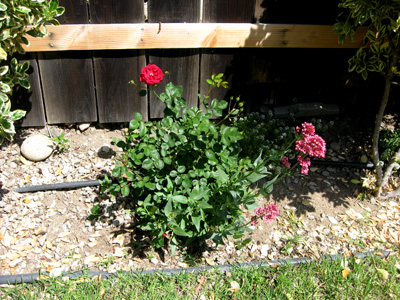 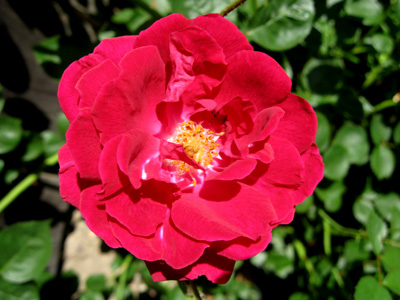 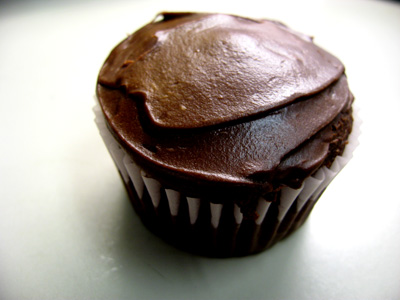 Friday Finds (hosted by MizB at Should be Reading) is another new meme I've decided to try participating in. This weeks finds are:

beautiful boy by David Sheff is a book one of my coworkers asked us to pick up for her. I don't actually know what it's about, as I've never heard of it, but she seemed happy to get it.

I read Melissa Marr's first book, Wicked Lovely, a while ago and really liked it, so I'm excited to read Ink Exchange (it finally come out in paperback so I could buy it!). Of course, I also discovered that there's a third book - Fragile Eternity - which has the same characters from Wicked Lovely, whereas Ink Exchange introduces new ones.

It was 10 years ago this week that Rex Allen Krebs was arrested for the kidnap, rape and murder of two local college students. I still get chills thinking about that creepy man lurking around SLO and what he did to those two girls! Anyway, I don't normally read "true crime" books, but in honour of Rachel and Aundria, I'm going to give this one a shot.

Princess Ben by Catherine Gilbert Murdock was a total impulse buy. I just saw the cover and the title and it caught my attention. The description on the back and the first review quote - "[A] deliciously frothy fairy tale." - Horn Book, starred review - sealed the deal. 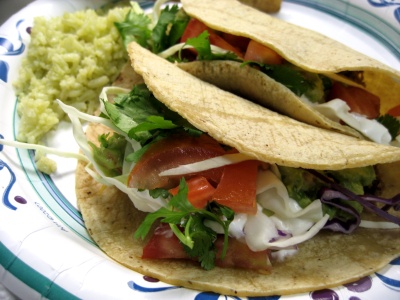 We're having a taco bar at work for lunch today to celebrate Miss G. returning to our Court (she'd been up in Paso helping them get all set up). Any excuse for food! Or none, sometimes we have food just because! Anyway, there's tons of homemade salsas and guacs as well as the usual taco fixings along with refried beans and awesome green rice! So delicious!

My co-worker and pod-buddy recently returned from a trip to Vegas with an aweome new tote bag: 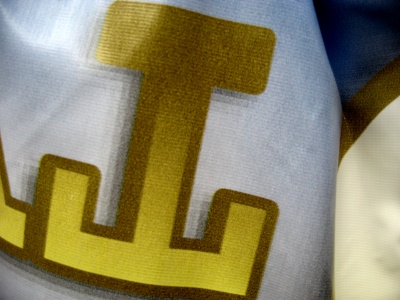 It's from priorLIFE and is made from a recycled banner! How cool is that?!?

So, wow, the very first Earth Day was April 22, 1970?!? Really? How come I don't remember ever doing anything to celebrate Earth Day in grade school, high school or college? In fact, don't remember even hearing the phrase "Earth Day" until the late 90s. Maybe. Maybe it was 2002, I don't know. Maybe it wasn't a big deal where I was living or going to school, so maybe we weren't out planting trees and holding "Save the Earth" rallys and all that stuff. Maybe it just wasn't as cool to "go green" then as it is now. Or maybe (and most likely) I just wasn't paying attention and/or didn't care to participate. Whatever the reason, Earth Day is in its 39th year and all of a sudden it seems like a Big Fat Deal and I'm left wondering: where the hell have I been? The answer: late to the party, as usual.

So, okay, people have been celebrating Mother Earth for almost 40 years, right? Then I have to ask: if this "save the environment" movement has been about this long, then why is the planet still being polluted, poisoned, razed and overpopulated? Why haven't we been building smaller electric or solar cars instead of ginormous pickup trucks and Hummers that spew filth into the air and keep us dependant on foreign oil? My grandfather waited decades for an electric car but had to settle for a hybrid, which is really cool, yeah, but still. How hard is it to come up with an electric car?  Toyota had the all-electric Rav-4 SUV, but wouldn’t let the general public buy it – only companies could temporarily lease them - then when the “experiment” was concluded, they destroyed the vehicles rather than put them for sale. Why are we still clear-cutting the forests that will take hundreds of years to be renewed to build huge estate homes that the majority of Americans could never afford to buy? Why does it still cost an arm and a leg to install solar panels on our homes? And why aren't solar panels just automatically built into new houses? Shouldn't all these things have become the norm decades ago? WTF, people?

And also, where have I been? Have I really lost a good majority of my brain cells, or was I really NOT PAYING ATTENTION to the fact that there's been a dang EARTH DAY for most of my freakin' life?!?

Then again, now that I think about it (with what's left of my muttled grey matter), my family have pretty earth friendly as long as I can remember. My maternal grandparents have been organic gardening since the 60s. My parents were zero populationists, which is why I'm an only child (and I suppose I could be considered a negative-zero populationist since I'm not having any children at all!). I remember my dad would holler at me if I left the light on in a room I'd just left or forgot to close the back door when we were running the AC. We recycled our aluminum cans back when you had to take them to the recycling center rather than having them - and paper and plastic and corregated cardboard, etc., etc., -  all picked up in one bin like we do now (at least here in California). I commute to work on the bus rather than driving my car every day. So, I guess, in a way, I've been doing the Earth Day thing my whole life without even realizing it.

But I need to do more. We all do. Happy Earth Day!