My friend purchased this neat little calendar for me last year. I have posted some of the ones I thought were particularly interesting, good, fit perfectly at the time, or were by women I've always admired. This is what my calendar had as the last quote for 2008: 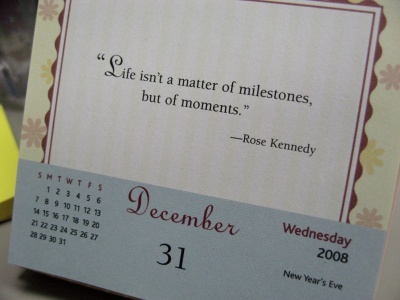 It's perfect, I think, for this time of year when many of us are looking back and picking out the moments that define the past year.

Happy New Year to all my family, friends and readers. Here's to 2009: Cheers!

1. What did you do in 2008 that you’d never done before? Realized I need to start moving up at work, that I need to challenge myself - no matter how uncomfortable that may be - and stop wasting my life, my experience and my education.
2. Did you keep your new year’s resolutions, and will you make more for next year? No, I'm pretty sure I didn't keep them ... I can't even remember what they were anymore! I'll probably try again this year, but maybe I'll call them Goals instead of Resolutions. Maybe goals will be easier to achieve.
3. Did anyone close to you give birth? One of my co-workers had a gorgeous baby girl earlier this year. She just started back to work after maternity leave today! (The co-worker, not the baby.)
4. Did anyone close to you die? I don't know if it counts as close, but a guy who's been riding the bus with me for a few years (we were on a first-name basis and chatted at the bus stop nearly every day) passed away this year. It was quite sudden, and quite a shock because he was always riding his bike, walking or doing yoga. I always thought he was the picture of health, but I guess you just can't tell.
5. What countries did you visit? None, I stayed in the good ole US of A!
6. What would you like to have in 2009 that you lacked in 2008? More self confidence. And long hair!
7. What dates from 2008 will remain etched upon your memory, and why? Specific dates I can't remember, but I enjoyed hanging out with DeeDee in February, getting out of town to Santa Barbara in June, visiting my friend Jewel in September, and going to Chicago for Halloween.
8. What was your biggest achievement of the year? Quitting smoking once and for all!
9. What was your biggest failure? Not losing all the weight I wanted to.
10. Did you suffer illness or injury? I still have iritis in both eyes, and suffered a severe tendon sprain in my right leg that left me gimping around for nearly two weeks. Oh, and I had a cold. Otherwise, I've been in pretty good health.
11. What was the best thing you bought? Size 16 jeans! And, yes, they fit!
12. Whose behavior merited celebration? All my friends simply for being so dang awesome!
13. Whose behavior made you appalled and depressed? Angelina Jolie and Brad Pitt continued to be disgusting, amoral, inconsiderate assholes.
14. Where did most of your money go? Travel and doctor appointments.
15. What did you get really, really, really excited about? Going to Chicago and hanging out with some awesome people. Lord, I needed that crazy-ass weekend!
16. What song will always remind you of 2008? It's Five O'Clock Somewhere. (My co-worker has that song on her phone and it goes off at 5:00 p.m. everyday! We look SO forward to hearing it!)
17. Compared to this time last year, are you:
a) happier or sadder? Happier.
b) thinner or fatter? Slightly thinner.
c) richer or poorer? A little richer.
18. What do you wish you’d done more of? Writing and stamping.
19. What do you wish you’d done less of? Sleeping and eating.
20. How did you spend Christmas? With my family at my aunt and uncle's house.
21. Did you fall in love in 2008? Yes, with an adorable fuzzy grey kitten named Dash!
22. What was your favorite TV program(s)? Chuck, The Amazing Race, Project Runway, Lost, Bones, House.
23. Do you hate anyone now that you didn’t hate this time last year? No, I pretty much hate the same people as I did last year, even though I don't remember who they are.
24. What was/were the best book(s) you read? The Princess and the Hound, Becoming Chloe, In the Forest of Forgetting, Gifts, and Mother Ageypt and Other Stories.

25. What was your greatest musical discovery? Fee, Addison Road, and Crystal Meyers.
26. What did you want and get? Down to a size 16 pants!
27. What did you want and not get? Younger looking skin
28. What was your favorite film of this year? Well, I only saw two films this past year - The Dark Knight and Twilight - and I'm going with Twilight.
29. What did you do on your birthday, and how old were you? I turned 42 and my friends/co-workers took me out for sushi.
30. What one thing would have made your year immeasurably more satisfying? Being 100% healthy and fit.
31. How would you describe your personal fashion concept in 2008? I tried really hard to wear fun, cute and fashionable clothes, but alas, my job sometimes (more often than not) requires me to go to dingy, dirty, dusty, icky storage facilities, and since I'd hate to mess up my nice new threads, I usually just wear khakis and knit/sweater tops.
32. What kept you sane? KLIFE radio, being able to read/sleep on the bus communting to a from work, and Fridays.
33. Which celebrity/public figure did you fancy the most? It's a tie between David Tennant and Zachary Levi.
34. What political issue stirred you the most? I try to stay away from discussing political stuff on my blog because I'm not "Politically Correct" in my beliefs and voting habits. Make of that what you will.
35. Who did you miss? My friend Jewel, though I did get to visit with her in September.
36. Who was the best new person you met? Fergal - one of the most hilarious people I've ever met!
37. Tell us a valuable life lesson you learned in 2008. If I want something I have to go after it myself.
38. Quote a song lyric that sums up your year.

Hotel stationary
Pour your heart out
Your life, your story
Write it down
You gotta write it down
The tear-stained pages
Going up in flames
When the smoke hits the ceiling
Will the memories fade?

Night turns to morning
You wonder why nothing’s changed
Do you really want forgiveness?
Or just the pain to go away?
Put pen to paper
This time for a different aim
The future is redemption
Your story of escape

Hotel stationery, pour your heart out
Your life, your story
Write it down, you gotta 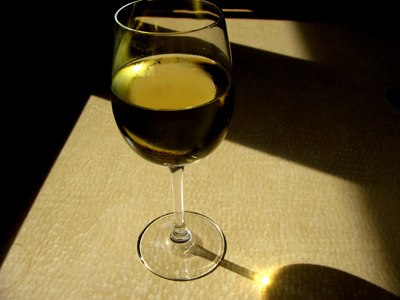 I finally went through all the pictures I took over the past year and chose what I think are 40 of my best shots. They are in a set on flickr here. Enjoy!

Of course, the star of the Best of 2008 set is the adorable little grey kitten, Dash! 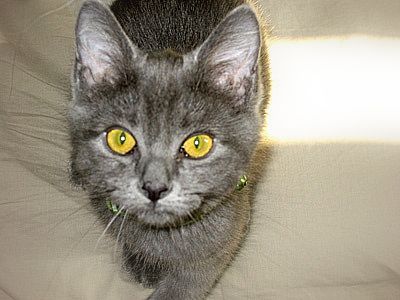 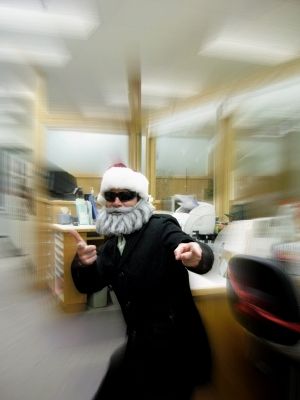 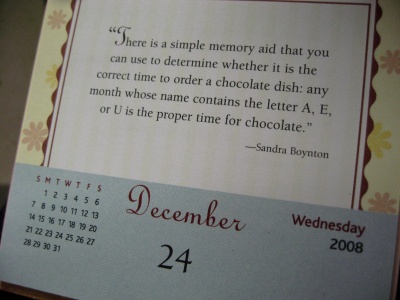 Season’s Greetings! 2008 has really flown by, and while I’m still battling iritis, and work has been insane, I did manage to take a few trips this year and have some fun!

Mom and I took a weekend trip to Santa Barbara early in the summer. We toured the beautiful old Mission and Mission Rose Garden, and visited the sobering display of crosses at Arlington West.

In the fall I visited my best friend Julie at her brand new house in Ohio, and met her two new kitties, Fester, the all-black cat, and Dash, the little grey kitten. 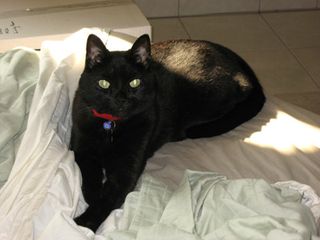 I spent Halloween in Chicago with a group of my internet friends. We were so lucky to have nice, warm weather that weekend! It was awesome to see everyone again! 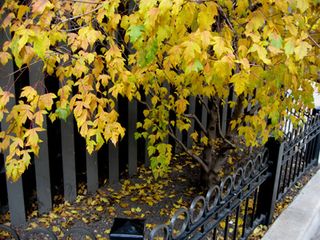 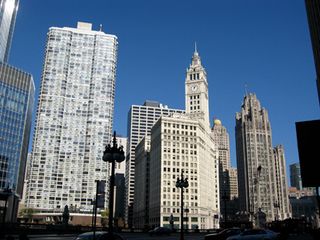 I hope you all had a fantastic 2008 and I wish you many blessings and joy in the coming year!

(Also seen on my journal for Holidailies)

I got the idea to do a Wish List themed Thursday Thirteen from Jennifer. Thanks, Jen!

1. An iPod touch. Yes, I have two iPods already, one of which can play TV shows, but the touch is shiny and new and it plays games! Games, people!

5. A Canon SLR digital camera with a telephoto lens attachment.

8. A new versa climber for the gym.

9. A pink Townie bike with a basket on front and a bell.

10. A large red suitcase with rollers.

(Also used as an entry for Holidailies.) 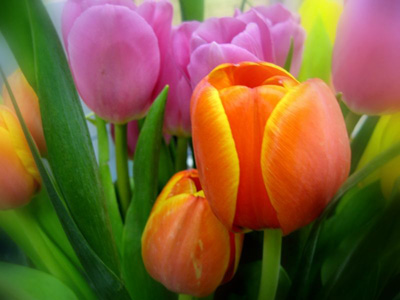