The garden doesn't look too bad, but I'm afraid there is something or several somethings attacking a couple of the plants. Specifically the zucchini is covered with those annoying little white bugs as well as dozens of flies. We've been spraying incecticidal soap for a couple weeks, but it may have already been too late. I can't figure out where all the damn flies are coming from, though. That's very annoying.

The tomato plants are finally starting to produce some tiny green tomatoes: 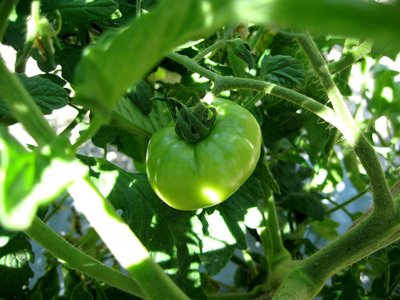 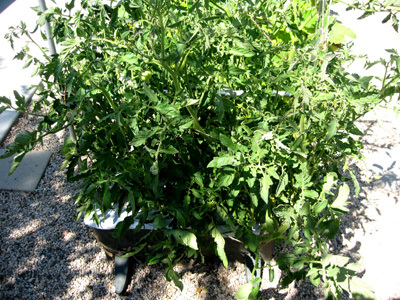 The zucchini plants appear to be okay, but as I said, they're covered with bugs and some of the leaves have brown patches on them. I have no idea what's going on with them. 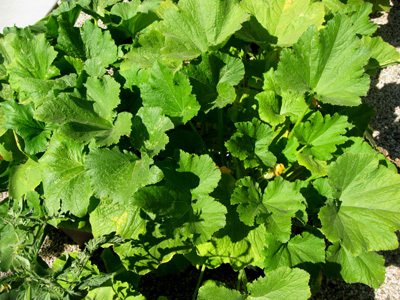 The yellow crookneck squash plant is still going strong, but we've sprayed it, too, since it's so close to the diseased zucchini. 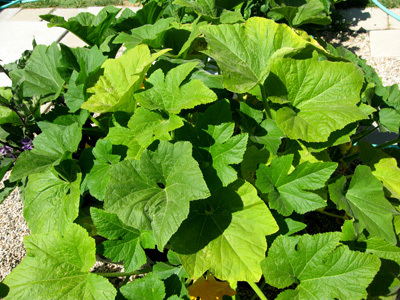 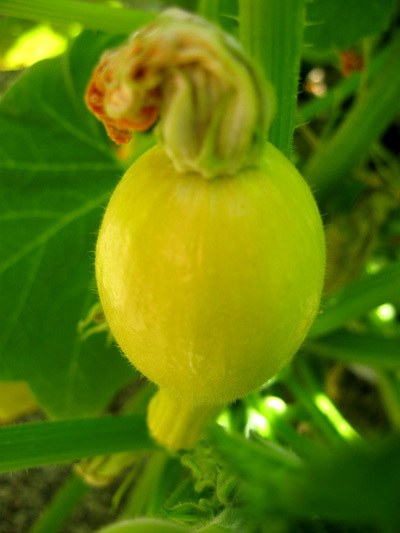 I feel bad for the Japanese eggplant, though, because the squash plant is totally crowding it out. The one little eggplant I could see looked good, however. 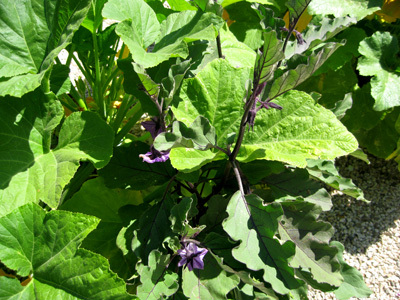 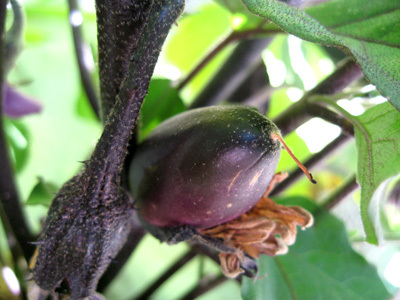 The bell peppers look fantastic! Beautiful green colour, lots of buds and blossoms, and even a couple peppers: 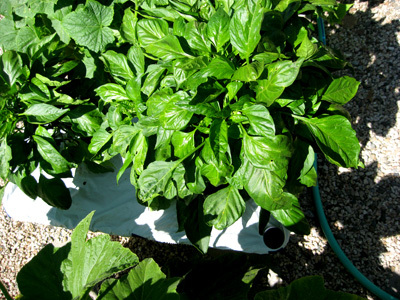 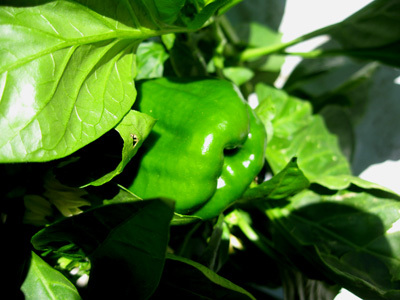 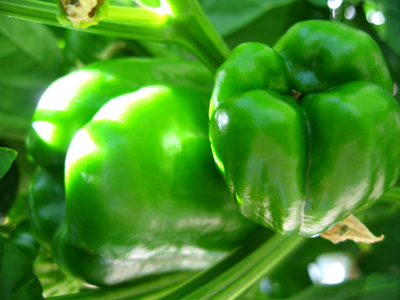 And, finally here are the cucumber plants. I couldn't find any cucumbers, though. The vegetation is so dence, I couldn't get down inside to look around. It's one of the best looking plants in the garden, though. Elsewhere in the garden, the lavender is absolutely beautiful, but it's also covered with dozens of buzzing bees, so it was hard to get very many pictures: Mom and I planted these brightly coloured flowers last year (or was it the year before? I can't remember!), and they came back this year: The echinacia is blooming as well: 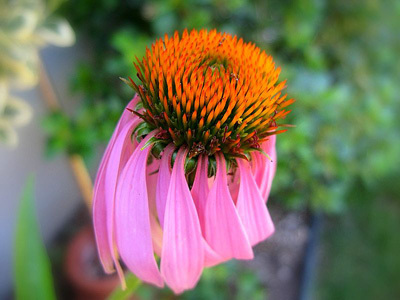 And so is this plant, which I can't remember the name of anymore: 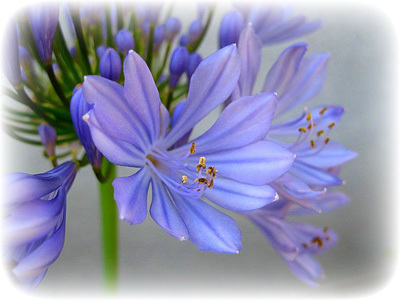 And, in the front, my Midas Touch rose has simply exploded with blossoms and buds! I bought some decorative bark to surround it and help keep more water around the plant rather than running down the hill. 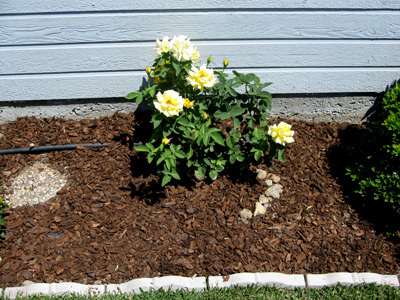 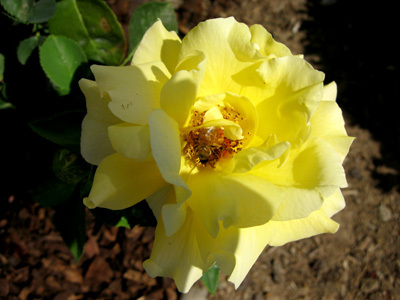 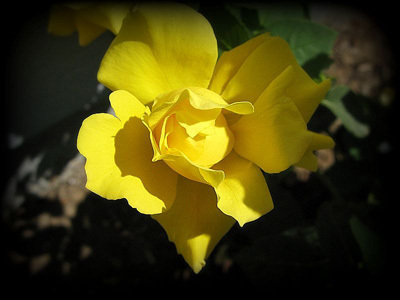 Next week mom and I are going to spend a lot of time working on the yard. It's a three-day weekend, so we'll have plenty of time to get our work done, and still rest and relax! Who knows, I might even grill something. Ha. Maybe not.

Posted at 12:57 in Photography, The Earthbox Garden | Permalink | Comments (0)

Bird at the Feeder 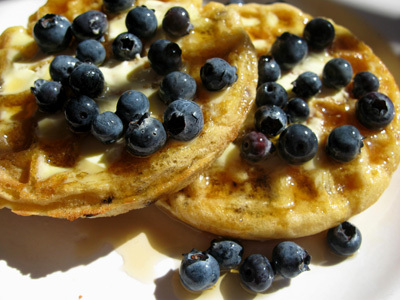 Purple with a Purpose 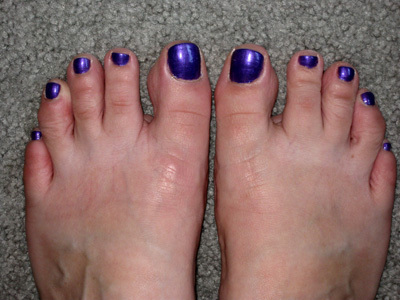 I know this colour looks a little bluish in the picture, but it's really a pretty bright shade of purple. 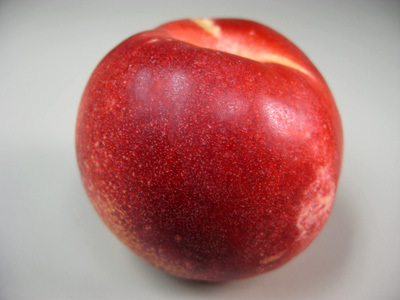 The FL Supervisor gifted me with this delicious organic white nectarine fresh from her tree. I shared it with my mom this evening and we agreed it was the juiciest, sweetest nectarine we'd ever tasted! 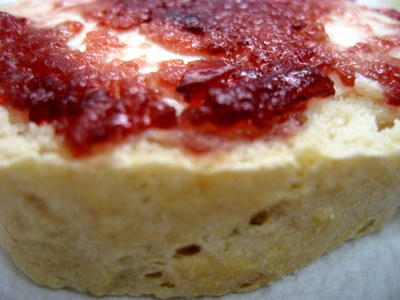 Yummy! There's way too many good cooks and/or bakers in this office!

So Now I Don't Know What to Think

So when I went to the doctor about my injured leg I weighed 175 on their scale. Remember? Well, yesterday at the gym I weighed myself - not on the digital scale, as I think it's calibrated incorrectly, but the kind like they had the doctor's office - and it still had me at 222. *sigh* So what does that mean? Are both the scales at the gym wrong? Or was the one at the doctor's office wrong? And how can those kind of scales be wrong? They're based on using the weights to balance the bar. So who's scales are right and who's are wrong: the doctor or the gym? And how much to I really weigh? I'm wearing size 16s so the 175 makes more sense. I guess. But I don't know. Maybe I never will. 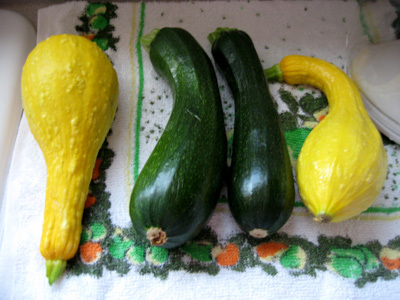 Posted at 21:53 in Photography, The Earthbox Garden | Permalink | Comments (2)

Check out the zucchini my mom found when she was watering the garden this afternoon: 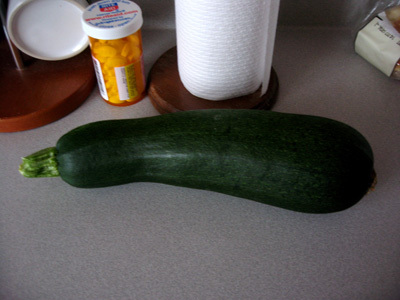 Posted at 18:51 in Photography, The Earthbox Garden | Permalink | Comments (0)

So far this week for the Thursday 13: