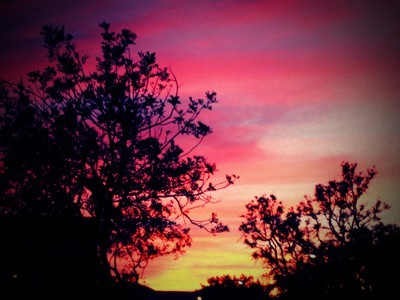 Tonight's workout was awesome! It was just the 1 hour of cardio (30 minutes on the elliptical, 30 minutes on a treadmill), but it felt SO good! I'm finally feeling like a normal human being again. Monday night I felt good but was still, I don't know ... off. But tonight, although I was tired and still feeling the effects of not working out for three weeks straight, I felt stronger and healthier than I have in a long time. This has been the longest road to recovery I've ever travelled, but I think I can finally see the light at the end of the tunnel! Well, they chose their jury and I'm not on it. I must admit I'm bitterly disappointed. I've always wanted to be on a jury. To be part of the judicial process To listen and deliberate and deliver justice! Not this time though. Pity, as this one would've been perfect: a three day trial (might've gone into Monday, but even that's no big deal) that would only be held in the afternoons. I could easily have switched my Dr. appointment from Friday to Monday or Tuesady, and I'd have all morning to keep up on my work! Ah well. Maybe next year!

We're into the selection process in the courtroom. My name hasn't been called yet, but I'm not giving up hope! Well, break's over, back in we go! 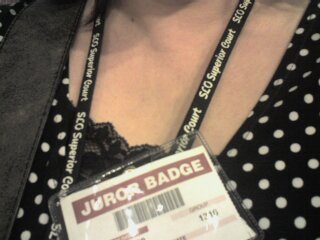 Well the orientation was just some basic information: where to park, how to validate your parking, be sure to wear your badge prominently, remember to turn in the bottom portion of the summons so they know you came in, and instructions on what to do when (if) you're excused,
This case is a misdemeanor so I don't know anything about it, nor do I know the judge except by name. We're currently on a break while the judge and the parties have a discussion. I'll let you know what happens next! 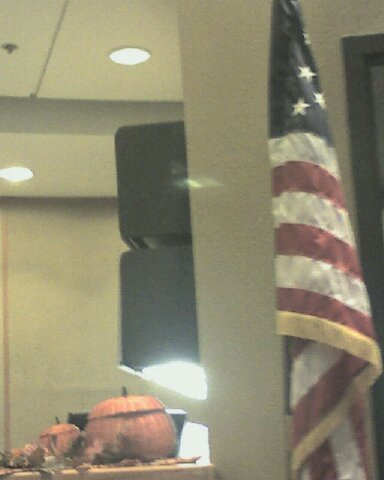 I'm down in the Jury Assembly Room (which is really nice since it was remodelled) with maybe 20+ people waiting for the Orientation, which I presume will be a description of the jury selection process. Should be interesting, anyway.

Okay, so here's the latest: I get to go down to the Jury Assembly room at 1p.m. to check in, and possibly be called to be on a jury! I'm kind of excited, but a little apprehensive, too. If I do get on a jury, will I be able to put in my eye drops every three hours? Will the trial be over by Friday when I have my next follow up appointment at the eye doctor? Can I put that off till Monday? Will the trial be over by Monday? I know I'm getting way ahead of myself, but I can't help it.

Next update when I get the chance!

So, today I have Jury Duty. I tried several times last night to call the number and find out what my fate was, but the number was either busy, or, if I did happen to get through, it put me on hold and left me with dead air for as long as I could handle it. The longest I lasted was five minutes. I also tried going online to check my status, but the web page refused to load (I left it trying for an hour while I watched Chuck, going in to check on it periodically). Finally, around 9:30p.m. I gave up.

I just got off the phone after a successful call to the automated information line, and now I'm on "telephone standby", which means that between 11:30 and noon today I need to call back to see if I'm called upon to serve.

Today was the first day I've felt like an actual living human being since the end of last month. I'm still tired, but not so physically and mentally exhausted I can't function. My eyes are much better, although my distance vision was quite blurry today. I had another follow-up appointment with the eye doctor (which I walked to since I was able to get the appointment in SLO, and man, did that walk feel good!), who said things were progressing very well. I asked him about the blurry vision, and he explained that the lens of the eye can become distorted because of the inflammation, and that it should eventually return to its normal state. He also agreed with me that it might just be from using my eyes at work so much. I have to go back in this Friday (in Templeton, so unfortunetly I have to leave work early), but the doctor seemed confident that I will be even better by then. He didn't seem to think I would be fighting this much longer. Yay!

This evening I was able to go back to the gym and work with TrainerDude. THAT felt fantastic! I was hoping for the hour of cardio, but the cardio room was packed, so we had to do the super set with the weights and versa climber (yuck!). It was difficult and I had a couple moments where I didn't think I was going to make it, but in the end, I did, and it felt SO good to be back working out! I had really missed it! That in itself was a wonderful feeling, and it's something I've been working for this past year. I wanted to make exercise such a habit that I would really notice when I didn't do it. I would FEEL it deep inside me, and I would WANT so badly to work out. I think I've got that, or at least I'm well on the way to getting that exercise habit back!

And, finally, I stepped on the scale (at the gym) for the first time this month and discovered I'd gone from 225 on October 31st, to 215! I knew I'd lost some weight because several pairs of pants suddenly were too big, but I had no idea I'd lost that much! I'm so excited!!!

So, in a nutshell, today rocked!

P.S. Also, I'm going to try to remember to do Participation Positives every Monday!

I have signed up to do Holidailies again this year. I seriously considered registering my blog, and just updating here, but I went ahead and used my sadly neglected journal. I am seriously thinking about closing self-portrait.net, so this might be its last hurrah.

In other news, the whites of my eyes are actually white now, and I can see close-up detail without the need for reading glasses (although I will still use them occasionally just to help my eyes out a bit). I have another appointment this afternoon, and although it's not with my regular eye doctor, I am hoping to get some answers as to how much longer I will have to use the drops, when the "floaters" will go away and when I can start wearing make up again.