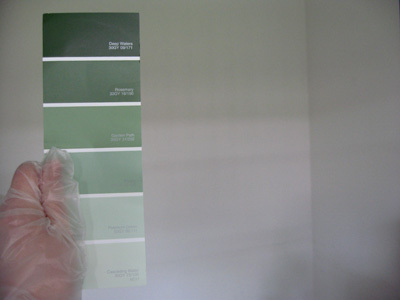 My mom and I started another Home Improvement Project this weekend. You can read all about it on my journal here. Cheers!

Books I MUST Have

Soon my friend Jewel and I will be picking up the rather daunting tombe The Grapes of Wrath by John Steinbeck, but first we will be reading Slaughterhouse Five in memory of the late Kurt Vonnegut. Aside from those two, I have a few new books recently placed on my List of Books I MUST Have:

The Dangerous Book for Boys by Conn Iggulden and Hal Iggulden sounds wonderful (And as I read the article I am now confliced as to whether I want to order the original British version (as I do with all the Harry Potter books), or buy the American version.). Yeah, I know it's supposed to be just for boys, but who's to say that girls can't do all that hunting, fishing, skinning rabbits, making go-karts, playing marbles and skipping stones stuff? In fact, my dad taught me to skip stones and fish (including putting a squirming worm on a hook, and gutting and cleaning the fish we caught) and how to use a power mower and change a tire (or was that my grandpa? Now I suddenly can't remember.) and all kinds of boy-type things. So anyway, yeah, this book is on my list.

The Stone Rose by Jacqueline Rayner. I haven't been reading any of the books associated with the new, updated Doctor Who series (which is awesome, btw!), and honestly hadn't planned to, but this book sounds like it might be pretty good. Even better, I might just download the audio version, so I can listen to it while I'm dozing on the bus.

Living with Eeyore by Elizabeth Baker. Sometimes I feel overwhelmed by negativity, and no matter how hard I try to stay positive, upbeat and cheerful, there always seems to be someone around to bring me down, whether they mean to or not.

Yeah, I know I have something like 40 books to read this year, but what can I say? I LOVE BOOKS!!!

I went down to the Courthouse Cafe because their lunch special - a taquito plate with quacamole, homemade salsa and refried beans that sounded much better than the frozen entree I'd brought with me - and I noticed in the cooler this pink can. Naturally, I was drawn to it (everyone who knows me knows I love pink!), and discovered it was an energy drink geared towards girls. It's called Go Girl™, it has Super Citrimax®, B vitamins and Taurine, and part of the money they make goes towards breast cancer research. AND it tastes good (as opposed to the Tab energy drink which I tried a while ago and sadly discovered it tasted like crap!)!! How cool is that?

Can I still be called a "Dental Diva" even though I've had a root canal and will soon be getting a crown? I'm beginning to wonder. The whole Dental Diva thing was to celebrate my newfound resolve to save my teeth from rotting out of my head beginning with the root planing, and continuing through my every three or four month periodontal cleaning and daily home maintenance. Now, just when I'm getting to the end of the periodontal maintenance and am on the verge of returning to a twice-yearly cleaning schedule, I end up breaking a tooth, needing a crown, then needing a root canal! Sounds like more of a dental disaster to me.

Anyway. My final root canal appointment was earlier this afternoon, and it went okay as root canals go. I guess. I'm a little achy and sore where I had the shots and from having my jaw open for an hour and a half, but other than that I guess I'm okay. Just tired. And disappointed. BUT, I'm pain-free, so I suppose I should be thankful for that, and I'm nearly finished with this whole process: the crown goes on (for sure this time) May 10th! 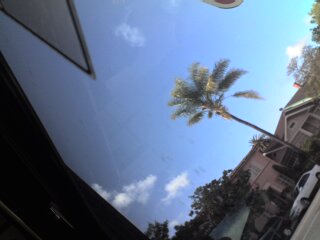 I planned to get a mani/pedi tonight after work (it's been two weeks since my last visit to the salon and I'm getting despirate for some pampering!), but apparently I'm not supposed to: first I realized I forgot my flip-flops - an essential when getting a pedi - and that I didn't have any open-toed shoes, then not five minutes later I got a nasty paper cut in my finger. Gah!
It was kinds one of those days, but the rain has stopped, the sun is out, and I'm looking forward to a fun weekend. Maybe I'll manage to fit a visit to the nail place on Sunday. 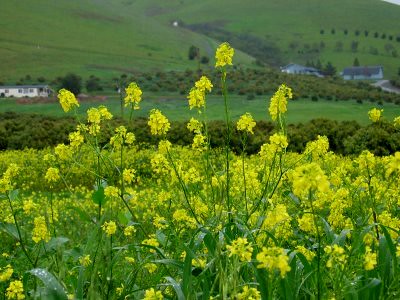 The countryside near Morro Bay, CA.

In light of recent events, whinging about my continuing Dental Diva troubles seems trite at best, and in poor taste at worst, but I'm going to write about it anyway, because I've got to get it all out of my head. I've been crying every night since Monday because of the shootings, as well as the chilling information coming out now about the kid* who did it. (I feel so bad for his parents! What must they be going through? How do you deal with the fact that your son, your child, the little baby you gave birth to and loved and raised, grew up to be a disturbed young man capable of brutally killing 32 people? How do you live with that? I don't know, but I've been praying for them just as hard as I'm praying for the families of the victims and those who survived but are injured.) It's all just about to break my damn heart, particularly the little update at the end of this entry by Rob.

So, yesterday I had what was supposed to be my final root canal appointment, but as luck would have it - my luck anyway - it was not. My dentist was unable to either find or completely clean out one of the canals (I'm not sure which), and so I will have to use next Monday's appointment (which was originally scheduled for crown placement) to finish the job. The crown will be placed at a later date to be determined after next Monday. Gah.

This has become such a time consuming, financially draining (I am now officially out of dental benefits), and physically and emotionally stressful few months. Many times I have been tempted to just head out to the garage, grab a pair of pliers, and yank the offending tooth out of my damn mouth. Sure that would leave me with a huge, unattractive, gaping gum-hole, but it would be cheaper in the long run than continuing to take afternoons off of work to sit in the chair for two hours and have a tooth worked on and worked on and worked on!

Today I'm still a bit sore where the shot was given, but still pain-free in the tooth area. That's the good news, and I guess I needed to share a bit of good news, even if it is relatively unimportant in the grand scheme of things.

*He reminds me so much of a kid I knew my Freshman year of college who called himself (name deleted after I realized it's probably not a good idea to have it on my blog where the guy could, like, Google himself and possibly find this entry). I don't know if that was his real name or not, but that's what he wrote under in English 101 class. He wrote damn disturbing stuff! He let me read a short story of his once. It was about a guy who kidnapped some college girls, killed them (at least one was killed by hitting her on the nose in just the right spot as to send a sharp piece of bone into her brain killing her instantly), then peeled the skin off one of the girls' skulls and wore it around like a mask and turned another girl's emptied-out skull into a jack-o-lantern. It totally freaked me out, it was so gross and disgusting - beyond anything that I'd seen in a Hollywood slasher film or read in a Steven King or John Saul book - and after that I always thought he was a horribly creepy kid (and yet he was super smart so I let him teach me about truth tables for Philosophy (Logic) class, which we also had together). Still, it never occured to me that he might actually do any of the things he wrote about, or that he was actually capable of harming anyone. He was just a creepy, weird kid. I saw him once or twice after Freshman year, but thankfully never had him in any more of my classes. Sometimes I wonder what happened to him. Sometimes I hope I never find out. 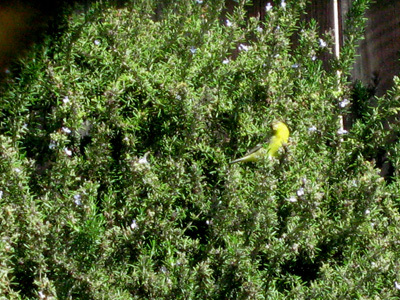 I don't know why the wild canaries (at least that's what I think pretty little yellow bird is) love the rosemary, but they do.

Found at Fredlet's.
What type of Fae are you? 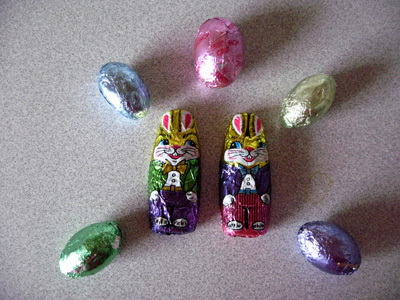