Yeah, it's that time of year again; time to make resolutions for the upcoming year. I've made resolutions every year, but rarely, if ever, succeed in keeping any of them. It's pretty stupid to keep making them, I suppose, but it's a bad habit I can't seem to break. So, without further ado, here is my list for 2007:

1. The obligatory "lose weight" resolution. The difference between 2007 and every other year I've had this as a resolutions: TrainerDude. Because he will continue to kick my ass at least two days a week (and with me working out at the gym independantly two other days a week, plus a walk or hike on the weekends) I really won't have much choice but to lose weight.

2. Figure out how to get myself to Hawaii in June. My friend DeeDee has a time-share in Hawaii, and has invited me (and Suzie) to go for a week in June. I'd love to, but I'm not sure I'll have the vacation time or money saved up to make the trip. I will work on it, though.

3. Make appointments for: my annual gyno exam, a mammogram (which I managed to totally not do at all this last year), an eye exam, a mole check, and an allergy assessment. Pretty self-explanatory.

4. Plan ahead for Christmas next year. PixieChick and I both decided we need to sit down around the first of September and plan out our Christmas cards, letters, gifts, etc., to prevent pre-holiday stress.

5. Spend more time outside. I need to go to the beach, go hiking, biking, or just sit in the back yard and bar-b-que; just be outside.

Another journal entry for Holidailies. 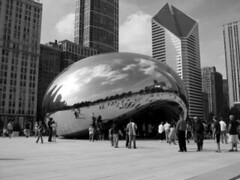 The Bean
Originally uploaded by LapisBlue.

(Also seen at my journal for Holidailies.)

For unto us is born this day in the city of David a savior, which is Christ the Lord. -- Luke 2:11

The First Annual Christmas Cookie Exchange was a rousing success! I only recieved eleven RSVPs, but I think EVERYone brought cookies! Honestly, I lost count, but we were constantly having to shuffle plates and platters of tasty treats to make room for new arrivals. Traditional Christmas music played lightly in the background, and when you first walked in, the place smelled like a bakery. Once we had everything set up, people recieved a plate and went down the table picking out cookies they wanted. At the end, PixieChick covered the plate with festive green plastic wrap and I stuck a Christmas bow on top. And, voila! A plate of Christmas cookies for them to take home for the holiday!

All day long people came up to us saying how fun, wonderful, and special it was; how nice it was to spend a few non-working moments with co-workers over a cup of coffee or tea, or a glass of milk and a yummy cookie. There were lots of smiles (some of them were of the sugar-induced-manic-type, but still smiles) on people's faces on Friday. That's what it was all about; the whole reason PixieChick wanted to do this in the first place, and the reason I agreed it was an awesome idea: Smiling, happy people. There's nothing better in the world!

(This entry can also be found in my journal as a Holidailies entry.)

This gallery contains the 25 best photographs (in my humble opinion) I took this past year, including "The Rock K Ranch" seen at left. Enjoy!

This is SO Cool! 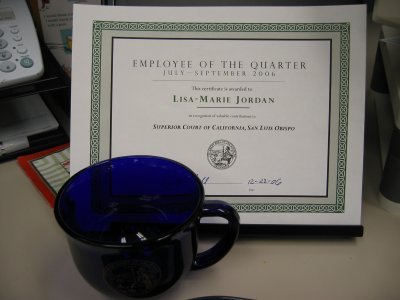 I know it's not even Christmas yet, but I already have 13 regrets. I still have a little time to fulfill some of them, but most of them I know I'll have to wait until next year. Maybe next year I'll get on the ball sooner. But as for this year, I wish I had ...

1. Burned Christmas CDs. ( I have a super-fun Christmas playlist with traditional carols done in an untraditional manner mingled in with some novelty Christmas tunes, but

2. Made cards for everyone rather than buying boxed cards.

3. Baked real homemade christmas cookies rather than getting the pre-made, pre-cut shaped ones.

4. Put up outdoor decorations (at least the wreath!).

5. Made some fudge or peanut brittle.

6. Baked some bread or muffins or coffee cake.

7. Made mulled wine or cider. (I've done the wine before - one time was fantastic, two times were terrible - but I've never tried cider.)

8. Played more Christmas music. (Besides my Funky Christmas Playlist, that is.)

10. Wore my Christmas jewelry. (I've got a great pin, but I always forget to put it on.)

11. Created something unique and fun to give as gifts. (I have no idea what, but I wish I'd come up with something!)

13. Had more Christmas cheer. (I haven't been a total Grinch this year, but I've had moments of "Bah humbug!")

I spent today finishing up my Christmas cards for the year. It wasn't as difficult as I thought it was going to be; actually, it was kinda fun!

I've been wanting try stamping on photographs for some time, but never found the perfect stamp/photo combination. Until now. I chose the photo "Sunset Over SLO", which I'd taken out the window of an airplane when I was flying off to my vacation in Ohio last summer, and the stamp "Sand Angel" by Stamp Clinic. It worked so perfectly, it was obviously meant to be!

The other rubber stamps I used were: Small Photo Frame by Stampa Barbara and "Rejoice" by That's All She Stamped on the front of the card, "For unto us is born this day ..." Bible verse by Printworks for the interior greeting, and Small Snowflake by All Night Media, "Happy New Year" by Magenta, and my custom-made "Hand-Stamped by" stamp on the back. The stamp pads I used were Adirondack's Cabin Fever and Espresso, and Archival Ink's Cobalt.

This entry can also be seen over in my journal as an entry for Holidailies. Cheers!

My Favourite Five photographs for December 2006 are up here. Enjoy!